Jonathan Sumption, dubbed by the British press as "the brain of Britain," is the winner of the 2017 Gründler Prize for "The Hundred Years War, Volume IV: Cursed Kings." This year's prize, which comes with a $1,000 cash award, was announced in May at the 52nd International Congress on Medieval Studies—the world's largest gathering of medieval scholars, which is held annually in Kalamazoo on the WMU campus.

The prize is named for the late longtime director of WMU's Medieval Institute and has been awarded annually since 1997. It is designed to recognize a book or monograph on a medieval subject the selection committee determines has made an outstanding contribution to the field. Authors from any country are eligible for the prize, and nominations are accepted from readers or publishers.

Sumption's book focuses on the period of 1399 to 1422, a time that saw particular chaos in both Britain and France. It begins with the deposition of King Richard II of England and civil war in France and ends with the deaths of two other kings—Henry V of England and Charles VI of France. 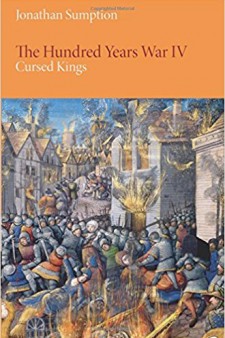 Published by the University of Pennsylvania Press, Sumption's 907-page book has received acclaim in the popular press. The Guardian newspaper in London called it "a 'Game of Thrones' history with plenty of crazed kings, martial heroes, dastardly betrayals, silky clerical types and prisoners rotting in foul dungeons. It is difficult to see that anyone could do this type of history better than Sumption."

Sumption is a former history fellow at Oxford and a justice of the Supreme Court of the United Kingdom. He is the author of a number of books on topics such as the Crusades and pilgrimages.