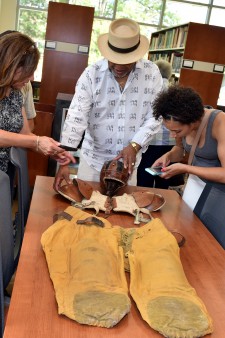 KALAMAZOO, Mich.—One hundred years ago, Sam Dunlap, Western Michigan University's first black student athlete, struck fear in the hearts of gridiron opponents and racked up scoring records that lasted decades, all the while fighting racism on and off the playing field.

On Friday, July 28, a Dunlap family delegation toured WMU to visit the campus haunts of the record-setting player known nationally as "The Black Ghost." More than a dozen family members from around the state and nation met with WMU leaders during the visit. Their visit was organized by Dunlap's nephew, Moses Easley, of Nantucket, Massachusetts, who was himself a college football player for Indiana University.

Sam Dunlap was the football player Knute Rockne called one of the finest athletes he'd ever encountered. He played for WMU for four seasons—1915 through 1917 and 1919—taking a year off to join the Army during the World War I effort and serve as an interpreter. The halfback earned a total of 11 varsity letters in football, baseball and track. His 1916 record of 19 touchdowns for the season stood in the Bronco record books for 98 years, falling to second place only in 2014. He is in second place for most touchdowns in a single game with seven scored in a single 1916 game.

The Benton Harbor High School football star was originally recruited by the University of Michigan, but then rejected when the head coach there learned he was black. WMU's first president, Dwight Waldo, welcomed Dunlap to the WMU campus, and throughout Dunlap's playing career at Western, Waldo and football coach William Spaulding worked with Dunlap and the WMU team to address such issues as teams and players who refused to take the field against Dunlap and travel options and hotels that excluded the player. 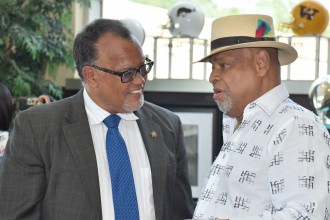 Montgomery lauded Dunlap as the kind of student WMU has always sought and has helped to reach their full potential.

"He was not just an athlete, he was an athlete and a scholar and an intellectual—someone who used his mind and talent in exactly the way we've always encouraged in students," Montgomery said.

The Dunlap saga has been recounted in Larry Massie's WMU centennial history, "Brown and Golden Memories," and also by historian Tom Dietz, who wrote about Dunlap for a 2003 issue of Michigan History magazine. Both authors' accounts of Dunlap's Western athletic career focus on an episode in 1915, when the Culver Military Academy refused to play Western if Dunlap took the field. Waldo told Dunlap the school would support the player if he chose to play, but Dunlap opted to sit out the game—the only game he missed in his collegiate career—while his teammates trounced the offending team from Culver by a 69-point margin. 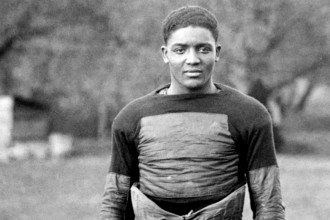 Dunlap and Waldo remained lifelong friends. After college, Dunlap coached at West Virginia Collegiate Institute for three years, then lived in New York and California, returning to Kalamazoo in 1951. After his 1961 death, he was buried in Kalamazoo's Riverside Cemetery.

Additional stops on the Dunlap family tour included the Seelye Athletic Center; the Zhang Legacy Collections Center to view Dunlap's uniform, equipment and news coverage of his accomplishments; and University Arena, where Dunlap is enshrined in the University's Athletic Hall of Fame, having been inducted in the first group of honorees in 1973.