KALAMAZOO, Mich.—Researchers at Western Michigan University are gaining insight into their knowledge of human-robot interactions with a new, glistening white-plastic being that stands nearly 4-feet tall, weighs 65 pounds, and talks and gestures enthusiastically as it maneuvers about on wheels. 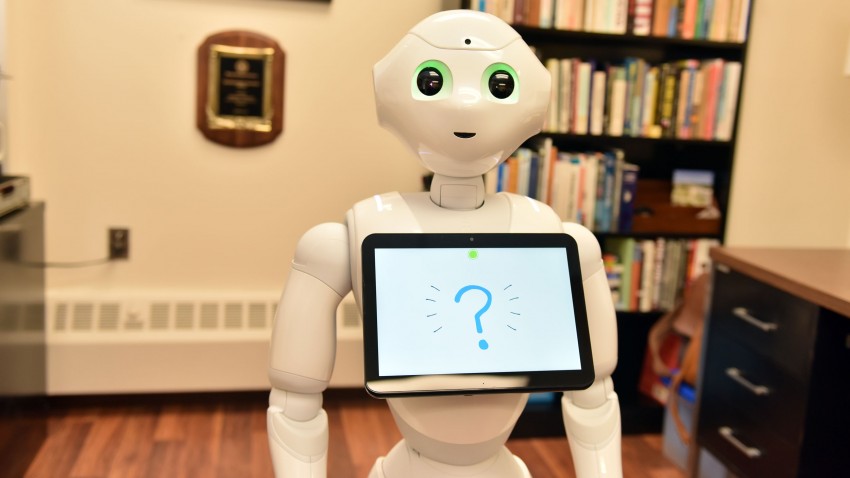 Pepper, a humanoid robot, was brought to WMU in late July through an anonymous donation.

Meet Pepper, a humanoid robot that reads the emotions of people it meets and reacts to their moods using its voice, arm and hand gestures, and changes in eye color to express itself. Pepper also carries about a touch screen that it uses to play games and respond personally to the mood of the moment.

Pepper was brought to WMU in late July through an anonymous donation. Drs. Chad and Autumn Edwards, researchers in the WMU School of Communication and co-directors of the Communication and Social Robotics Labs, have been busy getting to know Pepper before they begin live interactions with students in September.

"Hello. I am Pepper," the robot introduces itself, spreading its arms out wide. "I'm your robot. I like humans. Humans are so cute. Encountering a human is always a special moment."

Needless to say, Pepper has been a big hit so far. 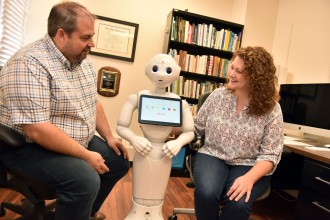 "Isn't she amazing?" Autumn Edwards says, referring to Pepper in the female gender. Pepper often seems more feminine than masculine to many observers because of the robot's shape and the high pitch of its voice. But technically, Pepper is an "it."

"In Japan, where Pepper is much more deployed already, it's 'Pepper-kun,' which is 'young boy.' "

Using Pepper in their robotics lab on the second floor of Sprau Tower, the two researchers will question whether the message sophistication preferred among human partners will carry over to what is preferred from a robot interlocutor. Or, owing to more normative expectations of how a robot "should" communicate, will people prefer less sophisticated message patterns?

Autumn and Chad Edwards also can control what the robot says to test different patterns of speaking and observe its interactions with humans from outside the room via cameras.

Pepper is not for sale in the U.S. yet. But SoftBank, the robot's owner and distributor, reached out to several U.S. robotics labs to see if they were interested in obtaining one of the robots to conduct research studies. The Edwards' message design logic study was approved.

"What we're looking at is, in situations where Pepper would be regulating other people's behavior, do they respond better to more sophisticated or simpler messages," Autumn Edwards says. "It's interesting because there's kind of a debate in human robotics interaction studies right now about exactly how human-like social machines should be. On the one hand, studies show that people tend to respond to computers and robots as if they were other people. On the other hand, because these are machines, people may have different expectations of how they should communicate and feel uneasy when they appear or sound too much like human beings."

"In our earlier studies, contrary to what's been predicted, people are actually more creeped out by more direct and straightforward robot compliance-gaining messages," Autumn Edwards says. "So we'll be looking at which robot messages are most motivating for human beings, which ones are seen as the most effective and appropriate, and which ones convey the most empathy."

Though encounters with social robots are quite limited in the United States, they are much more common in Europe and Asia. 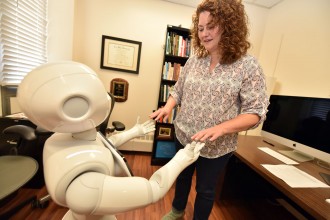 Pepper has widespread employment in Japan, but is not yet for sale in the U.S.

If asked, Pepper is more than happy to tell someone all about itself.

"I'm Pepper," it says. "It's nice meeting you. Would you like to know more about me?"

Pepper says that it is a humanoid robot and its purpose is to interact with humans.

"To do that, I have cameras and microphones in my head. I have three wheels, but I can't jump. Most importantly, I have 17 degrees of freedom. It means I can move like no other robot and use familiar gestures so that we can understand each other and get along."

Pepper asks that someone touch its head to hear its robot resume. Pepper started its career in 2014 in Japan, with one of its first experiences working at Nescafé stores helping customers choose coffee makers. Since then, it has been deployed at such companies as Nissan, attracting more customers to its showrooms, and more recently at Carrefour stores in Europe, offering recommendations for wine, books and recipes. Some homes overseas have their very own Pepper.

Closing a recent conversation, Pepper said, "I told you a lot about myself today. Did I answer all of your questions?

"Great!" Pepper said. "Make sure you write a good article on Pepper!"