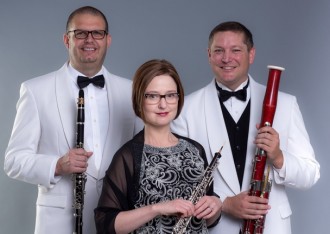 The concert will feature newly composed music for the PEN Trio + electronics by Charles Nichols and Daniel Eichenbaum as well as the world premiere of "Entanglement," an interactive audiovisual work for solo oboe and computer composed by Christopher Biggs and performed by PEN Trio oboist Nora Lewis. Biggs and Lewis serve on the faculty of WMU's School of Music. Composer Charles Nichols will be in residence with the PEN Trio and will work with composition and music technology students during his visit.

The PEN Trio bridges performance and scholarship to explore and expand the repertoire for the traditional trio d'anches. The ensemble regularly tours throughout North America and abroad and has become known for the quality and energy of their performances. The PEN Trio has visited dozens of leading universities and has performed at numerous academic conferences, chamber music series and private functions. Recent highlights include performances in Cuba, Guatemala, China, Hong Kong, Panama and Trinidad, as well as appearances at the annual conferences of the International Double Reed Society, ClarinetFest, College Music Society, National Flute Association Convention, and National Association of College Wind and Percussion Instructors, as well as radio broadcasts on Michigan and Alabama Public Radio, as well as national radio stations in Cuba (CBMF) and Guatemala (TGW).

The members of the PEN Trio are passionate about performance, education and scholarship, and the group is dedicated to expanding the scope of the traditional trio d'anches as well as bringing the intimate yet intense sound of this unique instrumentation to a wider audience. The term trio d'anches was coined by bassoonist Fernand Oubradous in 1927 to describe the now legendary Trio d'Anches de Paris. This celebrated group featured the three reed instruments commonly found in the orchestra oboe, clarinet and bassoon. Popular mythology asserts that the group came together to explore a more perfect blend of timbres known as "une parfaite homogénéité," that is not available to the standard woodwind quintet instrumentation, which includes the distinct and varied timbres of ute and horn.

The PEN Trio was formed, in many ways, to continue the work that the Trio d'Anches de Paris began nearly 100 years ago. Since 2010, the PEN Trio has premiered works by William Bradbury, Jenni Brandon, Allen Cohen, Jon Grier, M. Shawn Hundley, Peter James Learn, Wendy Wan-Ki Lee and Aleks Sternfeld-Dunn, and has promoted these works in concert around the world. In 2013, the PEN Trio partnered with Trevor Cramer and TrevCo-Publishing to create the PEN Trio Collection. This collection includes new works as well as new editions of existing works to make the trio d'anches more accessible to musicians around the globe.