Renowned trombonist to perform at WMU 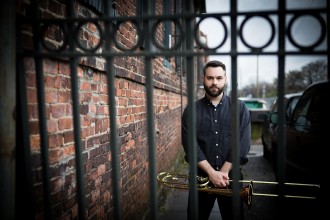 KALAMAZOO, Mich.—Jeremy Wilson, associate professor of trombone at Vanderbilt University, will be performing a solo recital at 7:30 p.m. Wednesday, Sept. 20, in the Dalton Center Recital Hall.

Prior to his appointment at Vanderbilt, Wilson was a member of the Vienna Philharmonic Orchestra and its sister organization, the orchestra of the Vienna State Opera. He joined those orchestras at the age of 25 after winning what was his first-ever orchestral audition, and in 2010 became one of just a handful of Americans to have ever been made a full member of the Vienna Philharmonic Society. He performed hundreds of concerts as a "Wiener Philharmoniker," the vast majority of which were under the batons of the world's leading conductors, including Daniel Barenboim, Pierre Boulez, Gustavo Dudamel, Valery Gergiev, Mariss Jansons, Lorin Maazel, Zubin Mehta, Riccardo Muti, Seiji Ozawa, Sir Simon Rattle, Christian Thielemann and Franz Welser-Möst.

Wilson was privileged to travel extensively while with the Philharmonic, performing in 28 countries throughout Europe, East Asia, the Middle East, Australia and North America, often with renowned soloists such as Lang Lang, Yefim Bronfman and Yo-Yo Ma. He performed in many of the world's most famous concert halls, including Tokyo's Suntory Hall, the Sydney Opera House, Amsterdam's Concertgebouw, Los Angeles' Walt Disney Hall, London's Royal Albert Hall, and New York's Carnegie Hall, not to mention the Golden Hall of the Philharmonic's legendary home venue, the Wiener Musikverein.