WMU honored for diversity, inclusion efforts for fifth year in a row 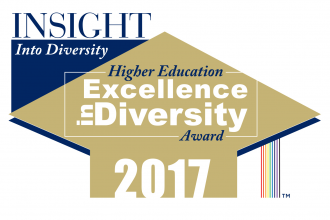 KALAMAZOO, Mich.—Diversity and inclusion efforts underway at Western Michigan University helped it earn recognition for the fifth year in a row from a national publication that focuses on diversity in higher education.

WMU was one of 80 institutions from around the nation named an annual Higher Education Excellence in Diversity—HEED—honoree by INSIGHT Into Diversity magazine. WMU has been honored by the publication each year since 2013.

"The HEED Award process consists of a comprehensive and rigorous application that includes questions relating to the recruitment and retention of students and employees—and best practices for both—continued leadership support for diversity, and other aspects of campus diversity and inclusion," said Lenore Pearlstein, co-publisher of INSIGHT Into Diversity magazine. "As we continue to see a record number of HEED Award applicants each year, nearly every school tells us they use the application itself as a tool to create new programs and to benchmark their accomplishments across campus. The process allows them to reflect on their successes and also determine where more work needs to be done. We also continue to raise the standards in selecting HEED institutions."

The honorees will be featured in the November 2017 issue of INSIGHT Into Diversity magazine and at insightintodiversity.com.

Inclusion efforts are in alignment with and a major focus of WMU's Diversity and Multiculturalism Action Plan that has guided University efforts since it was adopted in 2006. The extensive application submitted by WMU for this year's HEED award included information on:

Numerous professional development and training opportunities also are offered across campus including the Office of Faculty Development summer seminar for teaching inclusivity program; Lee Honors College Lyceum Lecture Series focused on lesbian, bisexual, gay and transgender issues; and the Real Talk Diversity Series. All of those were items considered in the award process.