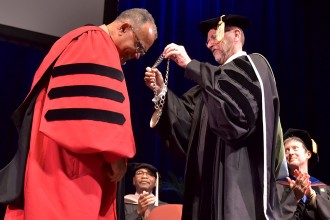 Dunn (right) hands the Presidential Medallion over to Montgomery (left)

KALAMAZOO, Mich.—In a wide-ranging address after his inauguration as Western Michigan University's ninth president Sept. 15, Dr. Edward Montgomery pledged a presidency focused on a quest for excellence, close ties with community and a focus on the success of students.

Montgomery spoke to a campus and community crowd in Miller Auditorium during a ceremony purposefully timed to take place during WMU's CommUniverCity weekend—an annual celebration of the ties between WMU and its home community of Kalamazoo.

"An active partnership between town and gown may not be the norm with all universities," Montgomery said, "But it is what makes this place and this community special ... One hundred and fourteen years ago, the partnership that underlies CommUniverCity was started. Under my tenure, it will keep on rocking."

The new president noted a variety of interactions he's had with a range of faculty, staff, student and alumni groups since taking office Aug. 1. He said it is apparent to him that there is a real desire among members of the campus community to see the University move to the next level and take its place among the "very leading research universities," but to do it in a way that keeps "students at the core of everything we do."

Specific areas of focus outlined by the new president in his speech, included:

Such actions, he said, will help students fulfill their potential, embed in them a lifelong search for discovery and help them become engaged citizens.

"By ensuring their success, we ensure our success," he said.

Montgomery, a labor economist with more than 35 years of experience in academia and public service, was selected as WMU president in April by the WMU Board of Trustees. He previously had been the dean of the McCourt School of Public Policy at Georgetown University and earlier had held positions in both the Clinton and Obama administrations. He replaces Dr. John M. Dunn, who announced his decision to retire in 2016.