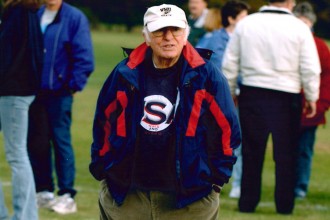 KALAMAZOO, Mich.—George Dales, the most successful coach in Western Michigan University athletic history, died in Kalamazoo Sept. 27. He was 96.

Dales was a track and field and cross country coach who led his teams to two of only three national championships ever won by Mid-American Conference teams. The beloved Bronco coach came to WMU in 1953, retired from his Bronco coaching positions in 1970, and remained a professor at WMU until his 1987 retirement. He was a legend in collegiate and Olympic sports. On campus, he was revered by generations of Broncos.

"George impacted countless lives and was a world-renowned ambassador for the sports of cross country and track and field. Though he will be terribly missed, his legacy of work for the sport internationally at the Olympic and collegiate levels, as well as his two national championships at Western Michigan will live on," said WMU Athletic Director Kathy Beauregard. "George was a great coach and a great teacher. He had the ability to motivate young men and women to truly believe that they could accomplish anything in life. Coach Dales was able to push students to be not only better athletes, but better individuals. He helped people achieve their unforeseen dreams."

Video of In Memory of George Dales - Western Michigan University

Dales' Broncos earned 25 All-American honors, producing 11 in track and field and another 14 in cross country. Dales' 1964 and 1965 NCAA championship teams were inducted into WMU's Athletic Hall of Fame in 2009, becoming the first entire teams—rather than individuals—inducted.

Dales never experienced a losing season at WMU, compiling an impressive career 113-35 record in dual track meets and 79-13-1 in cross country. Dales ended his coaching career with the winningest record in MAC history from the standpoint of team victories. His teams—both cross country and track—never finished lower than third in the conference.

Among the many athletes he coached was Olympic Gold Medalist Ira Murchison, world record holder in the 100m and 1956 Olympic winner in the 4x100m. Murchison also captured the NCAA 100-yard dash title in 1958. Another Dales athlete, John Bork, won the 880m NCAA title three years later. 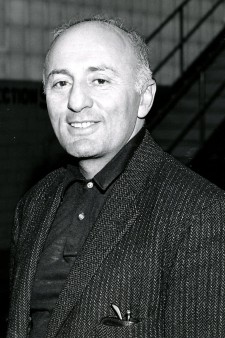 Dales served as an advisor in both Greece and Mexico and in the latter assignment worked with Christos Papanicolaou, who went on to become the world's first 18-foot pole vaulter. Papanicolaou also worked under Dales at WMU as a visiting student for several months.

When he was inducted into the Mid-American Conference Hall of Fame in 2015, it was one of a string of achievements and accolades that included:

Today, the most prestigious honor a coach can receive from the U.S. Track & Field and Cross Country Coaches Association is the George Dales Award. The award was established in honor of Dales for his relentless pursuit in the growth and development of track and field and cross country over more than half a century.

Dales graduated with honors from Miami University in 1942, and then he served for three years in the U.S. Navy during World War II. Following discharge, he coached at East High School in his native Cleveland for three years before attending the University of Michigan for his master's degree.

Dales was preceded in death by his wife, Christine. He is survived by four daughters, Maria, Janine, Corinne and Natalie.

Visitation is scheduled for 4 to 7 p.m. Sunday, Oct. 1, at Betzler Life Story Funeral Home at 6080 Stadium Drive. Following visitation, at 7 p.m., will be a Trisagion—a traditional Greek service—at the same location. The funeral service is set for 11 a.m. Monday, Oct. 2, at Betzler, with a reception following at WMU's Heritage Hall on Oakland Drive.