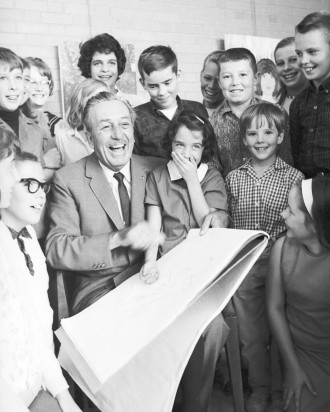 Walt Disney signs autographs for children during a visit to the Kalamazoo Institute of Arts in 1964.

Tremblay, a WMU alumnus and an avid Disney fan, penned "Walt's Pilgrimage: A Journey in the Life of Walter Elias Disney."

A book signing is planned from 4 to 6 p.m. Wednesday, Nov. 8, on the East Campus in the Zhang Legacy Collection Center, home of WMU's Archives and Regional History Collections. The author will present an overview of his book at 4:30 p.m.

"This book enables me to honor Walt Disney," Tremblay says. "Since I was a child, I was impressed by Disney's contributions to our world. This has been a labor of love to research and publish."

"Walt's Pilgrimage" was inspired from the WMU course of the same name that Tremblay developed and teaches for the Lee Honors College's Study in the States program, which is next being offered July 12-20, 2018.

The 400‐page book is a combination travel guide, biography and history text. It enables Disney fans to travel in Walt's shoes from his birthplace to his gravesite, and everywhere in between throughout North America.

The foreword is written by Disney's son‐in‐law, Ron Miller, who serves as president of the board of the Walt Disney Family Museum, which was started by Disney's daughter, Diane Miller. Eight WMU students and Dr. Sharon Carlson, WMU director of Archives and Regional History Collections, also contributed to the content.

"Walt's Pilgrimage" features more than 70 chapters. Staff members in Archives and Regional History Collections facilitated part of the research for the Kalamazoo chapter. The book also highlights more than 275 sites connected to Disney throughout the United States, Canada and Mexico and offers insights about such significant places as Disneyland, certain Walt Disney museums and sites that never came to fruition. 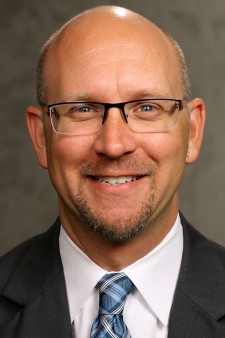 The Michigan native spent four years researching "Walt's Pilgrimage," which is his first book. He co-founded and co-owns TLC Productions in Canton and enjoys playwriting, acting and producing. In addition, Tremblay does college course development, consulting and trip planning. He is affiliated with various higher education programs and co-founded and co-edits the Journal of College Access.

He earned bachelor's and master's degrees in communication from WMU and a doctoral degree in educational leadership from the University of Michigan-Dearborn.

For more about the book, visit waltspilgrimage.com/book. Maps of WMU are available at wmich.edu/maps.