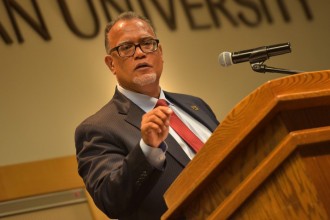 WMU President Edward Montgomery challenged faculty and staff to propose transformational projects and ideas during his fall State of the University address.

KALAMAZOO, Mich.—With a final tally of 61 ideas submitted for funding from the Transformational Initiative Fund announced Oct. 6 by Western Michigan University President Edward Montgomery, vice presidents and other senior executives have begun the task of identifying projects and ideas that could make a difference to WMU's future.

According to Kahler Schuemann, secretary to the WMU Board of Trustees and assistant to the president, the submissions represent a wealth of good ideas, as well as a number of important themes that emerged and could result in new campus initiatives that grow out of a series of proposals, rather than just one.

"The leadership team reviewing submissions appreciates the creative depth emanating from the proposals and is working diligently to best strategize a prioritized plan that captures the campuswide creativity and commitment represented throughout the proposals," he says.

The deadline for people to submit their ideas for funding was Nov. 1. The timetable calls for announcement of funding decisions in early January.

Montgomery charged senior staff with the task of doing an initial screening and prioritizing of the ideas proposed in the competitive process. Proposals needed to be focused on one or more of three goals he outlined in his original narrative. Transformational Initiative Fund proposals must do one of the following:

"Ideas that come from the bottom up are the best ideas," Montgomery said in establishing the initiative during his first State of the University address. With his announcement, he set up a $1 million fund that would be used to support the winning proposals. Preference, he said, would be given to initiatives that cut across departmental boundaries and have the support of one or more vice presidential areas.

The initial screening now underway is focused on whether a proposal addresses one of the three established goals in a measurable way, whether the idea is truly transformational, and whether the proposal can be sustained, is scalable and represents a true collaborative effort.