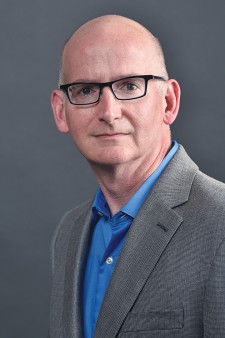 KALAMAZOO, Mich.—A faculty member in Western Michigan University's Department of Spanish is this year's winner of the Barbara Ort-Smith Award from the Michigan World Languages Association—MIWLA.

Michael Braun, a master faculty specialist of Spanish, received the award during the 53rd MIWLA Annual Conference in Lansing Oct. 12. Braun is the first person from WMU to earn the honor, which is the most prestigious distinction an educator in the field of world languages can receive in the state of Michigan.

"Teaching for me has always been about being creative," Braun remarked. "I hardly ever do the same lesson plan or teach a class in the same way. My goal is to have my students speak, listen, read and write on a consistent basis."

Braun joined WMU's Spanish faculty full time in 2004 after teaching Spanish methodology on a part-time basis for three years. Prior to his tenure at WMU, he taught all five levels of Spanish for 12 years at nearby Portage Northern High School and implemented the school's International Baccalaureate Curriculum.

With a combined 25 years' teaching experience at the secondary and postsecondary levels, Braun is recognized for providing students with one-on-one mentorship and invaluable firsthand knowledge combined with real-world application. WMU presented him with the University's Arts and Sciences Teaching Award in 2015-16.

Braun is a member of the American Council on the Teaching of Foreign Languages. He has presented award-winning workshops and conference sessions for local school districts and national organizations that include MIWLA and the American Association of Teachers of Spanish and Portuguese.

As the state's highest honor for educators in the field of world languages, the Barbara Ort-Smith Award recognizes those who have shown a strong commitment to the profession. MIWLA selects and honors the professional who best demonstrates leadership and the promotion of excellence in world language education.

The award is named for Barbara Ort-Smith, who received the inaugural honor in 1988. Ort-Smith served as the first foreign language consultant in the state of Michigan.