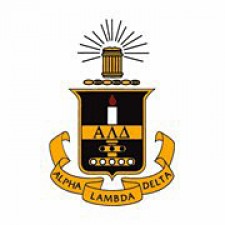 KALAMAZOO, Mich.—Western Michigan University's chapter of the national honor society Alpha Lambda Delta has again been awarded the annual Maintaining the Flame Award from the national organization for exceptionally active membership and dedication to community service.

The Maintaining the Flame Award is a follow-up award to the Society's Order of the Torch Award, the honor society's highest accolade, which the WMU chapter last won in 2015. The Order of the Torch award is only awarded to a chapter every four years, and the Maintaining the Flame award recognizes these chapters who continue to excel in programming, internal communications and campus visibility.

The advisor for the WMU chapter of Alpha Lambda Delta is Anthony Helms, director of academic advising for the Lee Honors College.

"We appreciate the effort it takes to maintain the energy to be visible on campus through programming and continued service to others, especially with leadership and membership changes in an organization," says Eileen Merberg, executive director of Alpha Lambda Delta.

Alpha Lambda Delta is a national honor society that recognizes students' academic success during their first year at a college or university. Founded in 1924, Alpha Lambda Delta has more than a million lifetime members and is present on over 275 campuses nationwide.

Alpha Lambda Delta's mission is to "encourage superior academic achievement, to promote intelligent living and a continued high standard of learning, and to assist students in recognizing and developing meaningful goals for their unique roles in society."