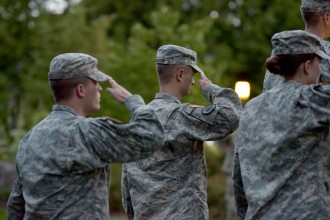 KALAMAZOO, Mich.—Western Michigan University has been named one of the nation's top colleges for veterans by Military Times magazine.

WMU came in at No. 99 on the publication group's Military Times Best: Colleges 2018 rankings, formerly known as the Best for Vets rating. The annual assessment was released Nov. 20. This is the publication's eighth annual set of rankings it calls the most comprehensive school-by-school assessment of veteran and military student services and rates of academic achievement.

This also is the eighth consecutive year that WMU has been named among the nation's top schools in the ranking, making it the only Michigan school to appear on all eight Military Times Best Colleges lists. Also in the top 100 of this year's list are the University of Michigan and Eastern Michigan University.

As with all Military Times rankings, Best Colleges 2018 is an editorially independent news project that evaluates the factors that help make colleges and universities a good fit for service members, and military veterans as well as their families. More than 600 colleges took part in this year's detailed survey.

Military Times' annual Best Colleges survey asks colleges and universities to meticulously document an array of services, special rules, accommodations and financial incentives offered to students with military ties, and to describe many aspects of veteran culture on a campus. Military Times also factors in data from the U.S. department of Veterans Affairs and Defense, as well as three U.S. Department of Education sources: the IPEDS Data Center, College Scorecard and the Cohort Default Rate Database.

The rankings are published in full in the issues of Army Times, Navy Times, Air Force Times and Marine Corps Times on newsstands this week and online at militarytimes.com. The rankings can also be found on each magazine's website. For the full Military Times Best Colleges 2018 rankings, go to http://bit.ly/2Bge00n.

WMU's Office of Military and Veterans Affairs serves more than 800 military-affiliated students and has the largest number of veterans enrolled at a public university in Michigan. The office was established in 2009 to support veterans, service members and the family members of veterans. It provides guidance and mentorship in academics, benefits and other areas, as well as general information about WMU and its services, the campus community and the VA.

WMU has earned accolades by offering in-state tuition status to veterans since 2007 and to veterans' dependents since 2008, assisting with obtaining GI Bill benefits, providing tailored academic and career counseling, offering disability services, and having a chapter of the Student Veterans of America.

In addition, the University has housed a VetSuccess on Campus program for southwest Michigan since 2012 with two partners—Kalamazoo Valley Community College and Kellogg Community College. This was the first VetSuccess program the V.A. authorized in Michigan and was refunded for a second three-year period. Working together, the three schools provide services to some 1,000 vets.

For more information on WMU's Office of Military and Veterans Affairs, visit wmich.edu/military.