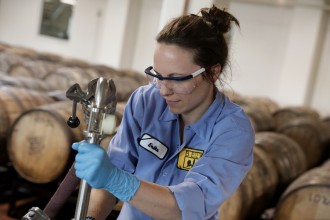 The Bell's Brewery Development Award will give participants experience in four key departments over the course of one year. Student interns will rotate through and gain valuable insight into Bell's quality, brewing, packaging and brewing innovation at its main brewery in Comstock.

"Talent continues to be in high demand within the brewing industry and by partnering with these two educational institutions, we are able to inspire candidates who not only have a shared passion for brewing science, but also roots here in Michigan," says Carrie M. Yunker, Bell's director of human resources.

"Southwest Michigan is a hub for craft brewing in no small part because of Bell's, and this new position is an unbelievable opportunity for our students. Bell's has put together a thoughtful and generous position for someone to get hands-on experience in all aspects of production at a thriving and world-renowned craft brewery. That they are reserving this position for someone from our program is a recognition of the care and rigor that we have incorporated from the very beginning," says Bertman.

The WMU and KVCC brewing program was developed in 2015 by the two schools, working in close coordination with the industry. The resulting "two-plus-two” program in sustainable craft brewing offers students the opportunity to earn a certificate or associate degree at KVCC, then move on to a Bachelor of Science degree at WMU.

The rigorous science curriculum was developed with input from an external advisory board comprised of a dozen of Michigan's top craft brewers, many of them in West Michigan, which has one of the country's highest per-capita densities of craft brewers.

"This is the kind of collaboration that we envisioned when we created the program together with KVCC," says Bertman

"Partnering the strengths of the two largest institutions of higher education in Kalamazoo with the incredibly experienced and diverse breweries in the area provides a great structure for students who are interested in enhancing the efficiency and sustainability of the industry," Babb added. "We are more than delighted that Bell's is providing this opportunity for our graduates. We sincerely appreciate Bell's support of our award-winning program and students."

Nationally, craft beer accounts for more than 12 percent of beer sales, and the industry is becoming a significant generator of jobs and revenues. Craft brewing contributed $2.09 billion to Michigan's economy in 2016 according to the Brewers' Association, making it ninth on the list of states in which the industry has the greatest economic impact.

WMU and KVCC will start accepting submissions in January. The final day to apply will be March 1, and the internship will begin on April 30.

Those selected must have a completed a KVCC Sustainable Brewing Certificate from the recognized program. This opportunity is available exclusively to KVCC and WMU students.

Bell's Brewery Inc. began in 1985 with a quest for better beer and a 15-gallon soup kettle. Since then, it has grown into a regional craft brewery that employs more than 500 people over a 32-state area, in addition to Puerto Rico and Washington, D.C. Bell's currently brews more than 20 beers for distribution as well as many other small-batch beers that are served at its pub in Kalamazoo, the Eccentric Cafe. For more information, visit bellsbeer.com.