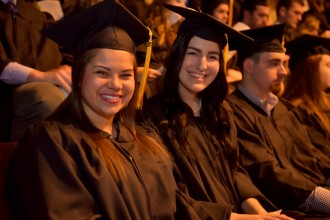 The future is bright for WMU graduates.

The 2016-17 version of WMU's annual Postgraduation Success Survey—the most comprehensive such data gathered and published by any public university in Michigan—shows that a full 91 percent of 2016-17 graduates are actively engaged in the next steps of their career paths. Active engagement is defined as employed full or part time, in the military, or in graduate school. A full 77 percent of those graduates who are employed full time are working in Michigan.

"This report captures the fact the WMU graduates are well-prepared for future success and are in great demand by employers within the State and across the world," says WMU President Edward Montgomery. "I am proud of our staff for using the data in this report to create a tool that can be helpful to prospective students and their families as they make decisions about their own career paths."

The data is based on responses from a record 77 percent of WMU's 5,205 graduates during the 2016-17 academic year, which closed last summer. This is the eighth year the survey has been completed. In each year, the results have reflected outcomes for a larger percentage of graduates of the University's more than 250 undergraduate and graduate degree programs.

"This is our highest response rate ever," says Dr. Ewa Urban, associate director for assessment with WMU's Career and Student Employment Services. Since 2010, she has been coordinating data collection and crafting an annual report that has attracted attention for both the high response rate and the short, three-month time frame between graduation and the student success outcomes recorded.

Urban's most recent report also shows that 85 percent of those who entered the employment world after graduation had a job related to their degree, and 88 percent were satisfied with their job. Median starting salary for those who earned a bachelor's degree was in the $40,000 to $45,000 range, with more than 10 percent of median starting salaries exceeding $65,000.

"A WMU education and degree has the potential to transform lives and open the door to future opportunity. This simple and complete data offers clear and compelling information for incoming students and their families that higher education pays off," notes Montgomery. "The outcomes reflected here are immediate, but the real benefits of earning a degree will continue to play out over the course of our students' entire careers."

A key feature of the annual report is the easily searchable online data, found at wmich.edu/career/planning. The site breaks data out by college and by majors or programs of study within each college. For each area of study, left-hand links on the site take viewers to a page that offers that discipline's success rates, median salaries, sample employers and job titles for WMU grads as well as sample graduate programs to which WMU grads are headed. 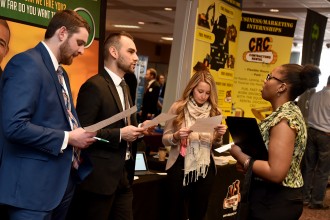 The survey results are searchable online by college and major.

A prospective student could look up environmental and sustainability studies, for instance, and find that 92 percent of last year's bachelor's degree graduates were actively engaged and working in such positions as a geospatial data analyst at Forensic Fluid Labs or in fire and life safety at Pfizer. The median starting salary range in the discipline for those with a bachelor's degree was in the $40,000 to $45,000 range.

A student looking into a paper engineering degree would find a 100 percent engagement rate, median salary of $65,000 to $70,000 and new alumni working in such jobs as a process engineer at Kimberly Clark or a research chemist at silicone paper manufacturer Loparex.

"Career exploration information for new and current students is part of the goal of this effort," says Urban. "This year, we worked very hard to make that exploration easier and offer a detailed look at the types of jobs and names of employers for recent graduates."

In addition to active engagement and salaries, the survey results showcase a wealth of other important information. Findings from the 2016-17 survey reveal that: