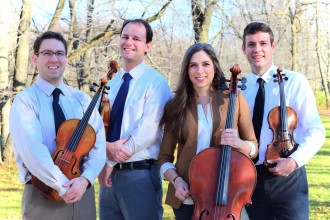 KALAMAZOO, Mich.—Western Michigan University brings the Chicago-based Kontras Quartet back to the Dalton Center Lecture Hall for a concert at 7:30 p.m. Saturday, Jan. 27. The event is free and open to the public.

Admired for its "superlative artistry," the Kontras Quartet has established an international following for its vibrant and nuanced performances. It has been described as "a tightly crafted and beautiful instrument" and has been lauded for its "crisp precision" and "enjoyable musical personality." Kontras means 'contrasts' in the Afrikaans language— fitting for a string ensemble whose colorful repertoire spans centuries, genres and continents.

The Kontras Quartet's recent and upcoming engagements include international tours of South Africa and Switzerland, broadcasts on classical radio stations nationwide, performances at Chicago's Symphony Center and the National Gallery of Art in Washington D.C., television appearances on NBC and PBS, as well as sold out concerts in Telluride, Salt Lake City, Raleigh and Arizona. Kontras is currently in its third season as the professional string-quartet-in-residence at WMU.

The Kontras Quartet records for MSR Classics and have released three critically acclaimed albums. The first, "Origins," features new and lesser-known works from the quartet's home countries, including the world premiere recording of Dan Visconti's "Ramshackle Songs." The recording was commended by Gramophone Magazine for the quartet's "scrupulous shading and control." The second, "Lucid Dreamer," features a septet that Kontras commissioned in 2013 with a generous Chamber Music America-awarded grant. The work treads the line between classical music and American folk and invigorates Kontras' ongoing collaboration with the legendary Kruger Brothers trio, as does its latest 2017 release, the "Roan Mountain Suite."