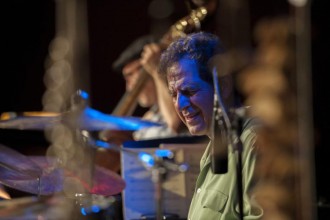 Bringing eight artists together from five countries, Under One Sun has been mesmerizing audiences since their premiere two years ago. Lead by drummer and percussionist Jamey Haddad, the group will be featuring the music of its saxophonist, Billy Drewes. Under One Sun also includes Michael Ward-Bergeman, hyper accordion; Luisito Quintero, percussion; Roberto Occhipinti, bass; Leo Blanco, piano;  Ali Paris, qanun and voice; and Salar Nader, tabla.

Under One Sun released its self-titled CD in late 2016 to great acclaim, with sterling reviews in DownBeat and Modern Drummer magazines. Under One Sun is a unique and transformative ensemble of jazz and world music virtuosos brought together with a synergistic and singular mission to transcend boundaries.