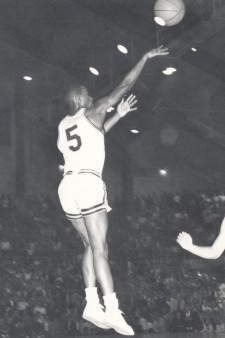 Newsome, a basketball legend from Roosevelt High School in Gary, Indiana, later became the first African American administrator at WMU and led a storied career in higher education in Indiana, Ohio and Florida. He will be recognized during a special halftime ceremony at the 2 p.m. game in which his No. 5 Jersey will be formally retired.  He also will be honored at a pregame indoor tailgate held in WMU's Student Recreation Center.

As a player at WMU from 1960 to 1964, Newsome averaged 32.7 points per game as a three-year varsity player. Newsome finished his career at WMU with 1,787 points. He broke the scoring record by more than 500 points in 1964, and that record held for more than 45 years. During part of his senior year, he was the leading scorer in the nation.

Newsome earned his bachelor's degree in 1964 in physical education and speech and a master's degree in physical education in 1965, both from WMU. Newsome's professional career began at WMU in 1964 as a financial aid counselor and field representative in the Office of Financial Aid. He then served as the director of the State Talent Search Program for the State Scholarship Commission in Indianapolis.  He later served as assistant dean of students at Indiana State University and went on to earn his Ph.D. in counseling and psychological services in higher education from ISU in 1976. Newsome completed post-doctoral studies at Harvard University and earned a certificate in management and development in higher education. Newsome served as dean of students at the University of Toledo, and vice president of student affairs at Florida Atlantic University from 1988 to 2006.  He resides in Boca Raton, Florida, with his wife Nellie, a former WMU student.

Members of the community are invited to celebrate Newsome's basketball career from noon to 2 p.m. at the Stampede Tailgate, and to attend the game at 2 p.m. Pre-registration is required for the tailgate, and details can be found at mywmu.com/bbstampede. Game tickets may be purchased from the WMU Ticket Office by calling 1 (888) 4-WMU-TIX.