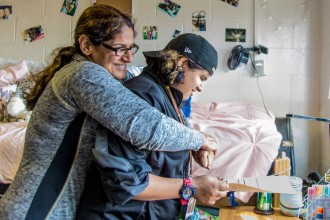 WMU parent Nandita Bajaj pauses to embrace her daughter, Ragini, while the family moves the first-year student into her residence hall.

What will your greatest challenge be when your son or daughter transitions to college?

Using a device to anonymously select a response, 32 percent indicated that missing their student would be the greatest challenge; 27 percent pointed to the financial implications of tuition; 19 percent worried about staying connected; another 19 percent pointed to being supportive while letting go; and 3 percent felt the parent-child relationship change presented the biggest challenge.

While the student is necessarily the focal point in the high school-to-college transition, the transition has a familywide ripple effect, a fact that is recognized and valued at WMU, especially through the Office of Family Engagement.

The family engagement office is celebrating a decade of guiding thousands of Bronco families through that transition.

More than that, the office has been an ongoing point of contact and source of support for families on a range of issues involving their students, from academic struggles to social dilemmas to the ins and outs of parenting a college student. 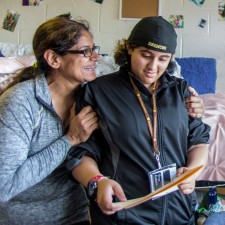 To hear Cynthia DeJohnette tell it, the family engagement office played an instrumental role in saving her son's freshman year from derailment.

She met Glaser, as many parents do, during orientation and, as other parents have said, never expected to call on the office.

Then, after starting the year strong, her son's grades suffered a second-semester slump last year, which is not at all unusual and absolutely fixable. But, from a state away, how to advise him on the best resources to tap at WMU to get back on track?

"I called Shari. She's my go-to lady," DeJohnette says. "Shari didn't just talk to him on the phone, she met with him in her office. She gave him resources on what to do and links that helped him out."

Following Glaser's advice, her son took the initiative to tap into the academic resources offered at the University and did the necessary work to improve his grades.

"She made that one-on-one connection," DeJohnette says. "She gave us her undivided attention and continued to work with us until the issue was resolved. And I appreciate her for it."

Glaser, who has led the family engagement office since its inception and is an experienced college parent herself, says the office is about making connections.

"If a student has a problem-and this is research-based-they will call their loved one long before they let us (at WMU) know what's going on. And they do that because that's the environment in which they've been raised, and the trust is there.

"So, the more information we can give family members about what we have available here at Western, the better. And simply the fact that we have an office that you can contact to get information gives them a liaison into the University to get their question answered, their concern addressed or to connect the dots with other departments and other areas," she says.

Karen Baldwin, another Bronco parent, says the regular updates from the office about campus happenings have given her a welcome view into her daughter's college experience over the years and an awareness of ways she can be supportive without encroaching.

"Those updates help me feel connected with what's happening at the school and what my daughter might be going through. When I know exams are coming up, I'll invite my daughter and her friends over for dinner or take them out for dinner," she says.

"And anytime I've ever emailed Shari or needed Shari, she's made me feel like I'm the only person she's working with." 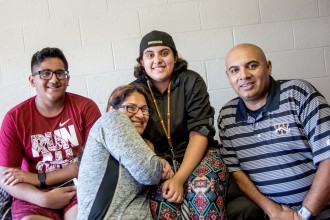 The Aroras adjusted to a new family dynamic as Ragini Arora left home to start class at WMU. On move-in day, they were all smiles and laughter.

Within the past 20 years, more and more higher education institutions have formally responded to the needs of parents and families accustomed to much more involvement in their offspring's schooling-from pre-school through post-secondary education-than previous generations.

And though labels such as "helicopter parent" and "tiger mom" are bandied about, Glaser says that "the pejorative reputation out there is really not the reality of it."

"But because of the fact that parents have been so engaged at the high school level, as a college or university you have two choices: You either don't accept that and you turn parents away" or you embrace parents and families as partners and advocates, she says.

Consequently, there's been a significant rise in parent and family offices at colleges.

In a 2015 University of Minnesota survey of 223 U.S. and Canadian higher education institution's parent-family programs, 53 percent indicated their programs had been established between 2000 and 2015, and almost a quarter of those had launched since 2010.

WMU's office began operating in 2007 to be a conduit of information and direct contact for families, and also to offer educational resources on how parenting changes when an offspring is in college.

For today's parents, many of whom have grown used to online, real-time access to their students' grades and other academic information K-12, it can be jarring to learn that this kind of access is no longer automatic because of federal privacy laws that protect college students' information.

"It is very, very different for families because they can't be engaged in that same way," Glaser says.

"That's why if you can create a vehicle for connecting with families, not only do you create that support connection, but you also to help educate them on: This is how your role will change. This is what you need to think about in the context of being a college student's parent or family member that's different than what you had in high school."

The Arora family is among the many new Bronco families adjusting to a new dynamic. Nandita Bajaj and her husband, Ajay Arora, moved their daughter, Ragini Arora, into a residence hall in late August.

"There's that nervousness of, 'What if she needs something when I'm not there?' But you raised them well, and they've done the right things. The first step in the right direction is going off to college," Bajaj says.

"The whole idea is they're moving into adulthood, and they're going to fly."

Learn more about the Office of Family Engagement and its resources at wmich.edu/families. This story originally appeared in the fall 2017 edition of the W Magazine at wmich.edu/magazine.