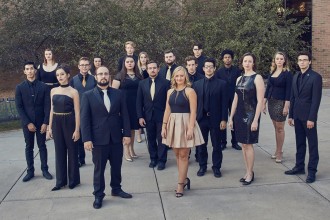 For nearly half a century, Gold Company has been setting the standard in collegiate vocal jazz, entertaining audiences all around the world with its award-winning sound and style. This select ensemble, part of the innovative jazz studies program at WMU, maintains an active performance schedule throughout the United States, Canada and Europe, including trips to both coasts just this past year. Gold Company has performed at the Jazz Education Network conference, MusicFest Canada and the Music Educators National Conference. The group has also performed at the divisional convention of the American Choral Directors Association, Disneyland, Walt Disney World, Carnegie Hall, Jazz at Lincoln Center, and jazz festivals across the United States and Canada.

Gold Company is made up of undergraduate and graduate students whose majors range from jazz studies to vocal performance, music education, music therapy and more. Graduates of the program are currently working everywhere from Broadway to Hollywood, touring with artists such as Stevie Wonder, Sheryl Crow, Taylor Swift, Sting, Liza Minnelli. Graduates are also working across the country in music production, composition and arranging, music publishing and music education. Gold Company alumni also lead some of the nation's top collegiate vocal jazz programs.

Gold Company is under the direction of Greg Jasperse, a WMU and Gold Company alumnus. A world-renowned composer, arranger, vocalist and pianist, Jasperse is no stranger to the stage or recording studio. His credits include movie soundtracks such as "Epic," "Oz, The Great and Powerful," "The Campaign," "Star Trek" and "Star Trek 2," as well as the Red Hot Chili Peppers' "Monarchy of Roses" and Muse's album "The 2nd Law." He had the pleasure of singing "Skyfall" with Adele on the 85th annual Oscars. He has also recently arranged, produced and directed music for "A Gallagher Family Christmas" for William H. Macy and the cast of Showtime's "Shameless."