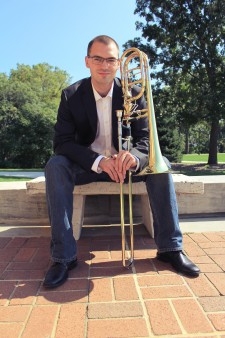 KALAMAZOO, Mich.—Bass trombonist Evan Clifton will be presenting a guest solo recital at 7:30 p.m. Tuesday, Feb. 13, in Western Michigan University's Dalton Center Recital Hall. The event is free and open to the public.

A 2015 graduate of the WMU trombone studio, Clifton has had a great deal of success since studying at WMU. He was admitted into the competitive master's programs at both the Northwestern University Bienen School of Music and the New England Conservatory. During the past two years, he has performed on a number of occasions with the renowned Cleveland Orchestra, as well as with the orchestras of Grand Rapids, Kalamazoo and Lansing.

Clifton has been a finalist in various international solo competitions, including the National Bass Trombone Solo Competition in 2012 and the International Trombone Association's Donald Yaxley solo competition in 2015, held in Valencia, Spain. He was also chosen as the winner of the bass trombone opening for the 2014 Round Top Festival Institute Symphony Orchestra in Texas. He is currently a University Distinguished Fellow at Michigan State University and bass trombonist with the Battle Creek Symphony. .