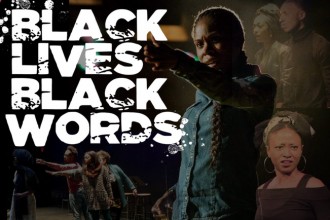 KALAMAZOO, Mich.—The Western Michigan University Department of Theatre is collaborating with the Black Arts and Cultural Center's Face Off Theater Company to bring to the public "Black Lives, Black Words" at 7:30 p.m. Sunday, Feb. 18, in York Arena Theatre located inside the Gilmore Theatre Complex on the main WMU campus. The event is free.

"Black Lives, Black Words" is an international artistic movement created by award-winning playwright Reginald Edmund. Edmund's goal for the movement is to empower artists of color to create community dialogue in answering the question, "Do black lives matter?" and explore black diaspora experiences through a series of original staged readings, spoken word poetry and music. WMU is the second university to host the performance. Other events have been produced internationally at theaters in Canada, England and in U.S. cities such as Chicago, Minneapolis, Baltimore and Toronto.

Local playwrights, poets and composers have been working on original pieces over the past few months and will collaborate with local directors and performers one week prior to the final performance. The final product will include six short plays and several spoken word poems, among them; "You're Gonna Learn Today" by Earlene McMichael, "Flood Gates" by Kendra Ann Flournoy, "Voices" arranged by Kendra Ann Flournoy, and previously written plays by Winsome Pinnock and Dominique Morisseau. Poems included are "Before You Knew You Were Black" by Tanisha Lynn Pyron, "The Murder of Kalief Browder" by Great Dane, "Dear Spectator" by Denise Miller, and an essay, "Black, I: In the Beginning" by Kai Harris.

Reginald Edmund is currently the founder and managing curating producer for Black Lives Black Words International Project, inspired by the #blacklivesmatter movement. He is a resident playwright at Tamasha Theatre in London, England and at Chicago Dramatists Theatre, an artistic associate at Pegasus Theatre-Chicago, and an artistic patriot at Merrimack Repertory Theatre. He was also a 2010-11 Many Voice Fellow with the Playwrights' Center. His play "Southbridge" was runner up for the Kennedy Center's Lorraine Hansberry and Rosa Parks National Playwriting Awards, and most recently named winner of the Southern Playwrights' Competition, the Black Theatre Alliance Award for Best New Play, and the Edgerton Foundation New American Play Award. His nine-play series titled "The City of the Bayou Collection" includes "Southbridge," "Juneteenth Street," "The Last Cadillac" and "All the Dying Voices" and were developed at esteemed theaters including Pegasus Theatre-Chicago, Boston Court Theatre, the Landing Theatre, the Playwrights’ Center, and more. Edmund received his bachelor's degree in theatre performance from Texas Southern University and his master's degree in playwriting from Ohio University.