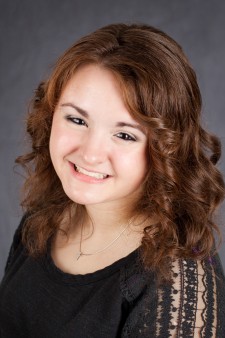 Kedziorek, a junior journalism major from Tecumseh, is one of just eight young journalists from across the nation selected for the association's fellows program that is now in its sixth year. It is designed to match the journalism fellows with seasoned mentors while they conduct research and develop news literacy skills by looking at issues from a community newspaper perspective.

Kedziorek's fellowship is sponsored by the Michigan Press Association and includes an all-expense-paid trip to Washington March 16-18. The trip will include Capitol Hill meetings with elected officials and staff members as well as a reception and dinner at the National Press Club and lunch with the National Newspaper Association's Board of Directors.

This year's topic revolves around the need for citizens to reach across the political spectrum for discussions about America's direction. "Red State, Blue State, What a State of Affairs" is the theme selected for the 2018 fellows. Kedziorek says she's not sure what to expect but is excited about the potential, given the past year of upheaval and political climate change in Washington.

"I want to know from people in D.C. what it's like to be in such close proximity to all these changes," she says. "I want to know how it impacts their real lives."

By mid-April, fellows are each expected to produce a story for local audiences that reflects the theme and the writers' understanding of the divisions in America. Their work will become eligible for distribution by the National Newspaper Association. The piece produced by Kedziorek also will be made available through the Michigan Press Association to news outlets around the state.

Kedziorek was selected as a fellow after applying and submitting a 300-word essay about what she would do with the opportunity.

"I didn't really expect to be chosen, and I was very honest in laying out my plan," she says. "I see and read about the controversies and hear about 'fake news,' but I don't have a chance to get reactions from real people. This opportunity will help me do that."

Kedziorek, a 2015 graduate of Tecumseh High School, has been a staff member on WMU's Western Herald since her freshman year. This spring, in addition to serving as editor-in-chief, she is completing a 10-week internship with WOOD-TV, an NBC affiliate based in Grand Rapids.