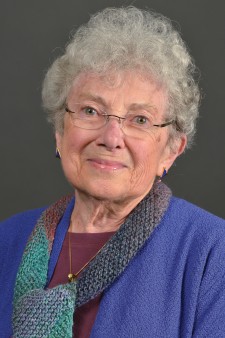 Bach came to WMU as an instructor and researcher in 1961 and served as a member of the faculty until her retirement 37 years later at the end of 1997. She was a member of the executive board of the University's Center for the Study of Ethics in Society since its inception in 1985, and in 1991, she took on the role of associate director of the center—a role she continued after retirement.

She was active in faculty governance, serving as a member of the Faculty Senate and on that body's councils.  In 1979, she was the recipient of the WMU Alumni Teaching Excellence Award.

On campus, she was a frequent speaker and the organizer of presentations and discussions on topics ranging from cloning, genetic screening and end-of-life decisions to organ transplants and health care and research errors.

Widely published and recognized internationally for her work as an advocate for ethics in health care, she served a visiting professor, researcher or consultant for such organizations as the Harvard, Dartmouth, Michigan State and WMU Homer Stryker M.D. medical schools, the Upjohn Co., and the Karolinska Institute in Sweden. Locally, she also served on biomedical ethics committees for Borgess Health and Bronson Healthcare and the West Michigan Cancer Center.  She served on the board of the Michigan Medical Ethics Resource Network and led a statewide effort to assess public attitudes on genetic testing.

A graduate of Queen's College in New York, Bach earned a doctoral degree in chemistry from the University of Wisconsin.