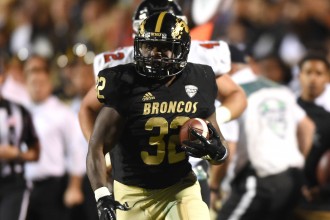 KALAMAZOO, Mich.—In its upcoming 2018 season, Western Michigan University's football team will be featured at least four times on national television, with a fifth game already slated as an ESPN2, ESPNU or ESPN3 selection.

Additional television coverage could be added during the year, including a Saturday, Sept. 8, matchup at the University of Michigan. All game times are currently to be announced.

WMU has its home opener vs. Syracuse University Friday, Aug. 31. The game will be televised on the CBS Sports Network. It will be the first-ever meeting between the two teams; however, the WMU coaching staff is very familiar with Syracuse. Head coach Tim Lester, offensive coordinator Jake Moreland and defensive coordinator Tim Daoust have all made previous coaching stops at Syracuse.

The Broncos head to Ann Arbor for the second week of the season, facing the University of Michigan for the seventh time in school history Saturday, Sept. 8. The 2018 meeting will be the fifth time since 2001 the two teams have met, after going nearly 60 years from 1943 to 2001 without playing one another. UM head coach Jim Harbaugh has family ties to WMU. His father, Jack, was the Broncos' head coach from 1982 to 1986, and his brother, John, current head coach for the Baltimore Ravens, was a graduate assistant on the Broncos' staff from 1984 to 1986.

WMU is on the road for the following two Saturdays, traveling to Bowling Green State University Oct. 13 and Central Michigan University Oct. 20. The Broncos host defending conference champion Toledo University on ESPN2 or the CBS Sports Network on Thursday, Oct. 25.

An updated 2018 MAC football schedule will be released in June with kickoff times and a television schedule for the first three weeks of the regular season and midweek games during late October and November. All other game times and television appearances will be announced 12 days prior to the scheduled game.