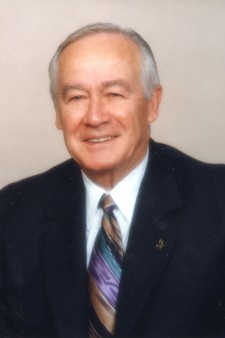 Russell L. Gabier, longtime campus development and alumni affairs leader and the founding president of the WMU Foundation, died Feb. 18 in Kalamazoo. He was 90.

A 1952 WMU alumnus, Gabier was a high school teacher and coach and then a middle school principal in Milford, Michigan, before returning to the University in 1958 to take a job as assistant director of admissions. He remained at WMU until 1986, retiring as assistant vice president for development and alumni relations and president and chief executive officer of the WMU Foundation. He helped found the foundation in 1976 and led its work for the first 10 years of its existence.

His accomplishments as head fundraiser and WMU Foundation president included successful leadership of the University's first capital campaign, Partners in Progress. Under his watch, successful fundraising through the foundation helped the 1984 launch of the privately funded Medallion Scholarship program. When launched, the scholarships became the nation's largest, merit-based awards given by an American public university.

Gabier's undergraduate career at WMU included winning a Mid-American Conference title in track, an accomplishment that was marked years later with his 1992 induction into the WMU Athletic Hall of Fame. He went on to earn a master's degree from the University of Michigan and did some doctoral work at Michigan State University.

A celebration of Gabier's life will be held at noon Monday, March 12, at First United Methodist Church of Kalamazoo, 212 S. Park St. W. It will be followed by a 1:30 p.m. service. His ashes will be interred at Fort Custer National Cemetery.