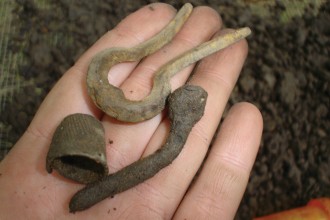 KALAMAZOO, Mich.—Registration is underway for youth and lifelong learners to participate in camps at the Fort St. Joseph Archaeological Project in Niles.

Sponsored by Western Michigan University and the city of Niles, the summer camp program provides an opportunity for the public to engage in history and search for evidence at the Fort St. Joseph archeology site. Led by Tim Bober, WMU public education instructor, participants spend a week discovering the extensive history of Fort St. Joseph and work alongside University students conducting on-site excavations, wet screening, mapping and analysis of recovered artifacts.

Applications are available at nilesmi.org until all camps are filled. The camp fee is $150.

WMU's Department of Anthropology pinpointed the fort's location during an initial survey in 1998. Excavations began in earnest there in 2002, when WMU began conducting  its annual archaeological field school at the fort site. Since then, faculty researchers and students at the University have continued working to uncover and interpret the fort's physical remains.

First established as a mission in the 1680s by French Jesuits, the fort was one of the earliest European settlements in the western Great Lakes region. It was an important part of a chain of settlements that facilitated the fur trade between Native Americans and the French, and it took on the roles of garrison and trading post during the first half of the 18th century.