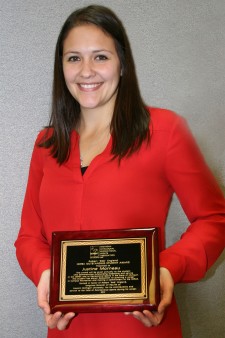 KALAMAZOO, Mich.—A master's degree candidate at Western Michigan University is one of only 12 graduate students from across the country to receive a 2018 NIRSA-William N. Wasson Student Leadership & Academic Award.

Justine Morneau, a graduate assistant for facilities in WMU's University Recreation department from Bad Axe, will be presented with the honor Sunday, March 4, by the NIRSA: School of Collegiate Recreation organization during its annual conference in Denver.

Morneau is enrolled in WMU's master's program in educational leadership, with a concentration in higher education and student affairs leadership, and expects to graduate in April. She also received the 2017 Robert W. England-MIRSA Outstanding Student Award in November from the Michigan Intramural Recreational Sports Association.

"Although I view these awards as me just following my passion and doing what I love, I am honored and humbled by the recognition," she says. "It warms my heart to know others appreciate my hard work and dedication to making a positive impact on the places I work and the people I interact with."

The Wasson Student Leadership & Academic Awards recognize outstanding students who are actively involved with the recreational sports unit on their university or college campus. The award goes to exceptional undergraduate and graduate students who set the standard on campuses through their participation or employment in recreational sports. This year, 22 undergraduate and graduate students from NIRSA's seven regions earned the award. Along with Morneau, just four were selected from Region III, which encompasses Illinois, Indiana, Michigan, Ohio and Wisconsin.

The Robert W. England-MIRSA Outstanding Student Award is presented annually to the student who demonstrates outstanding leadership and service in MIRSA and to recreational sports in Michigan. The award goes to a student who has shown dedication to pursuing a career in campus recreation as well as making a commitment to MIRSA.

Morneau intends to pursue a career in collegiate recreation, and she earned her educational leadership program concentration's 2017 Outstanding 1st-Year Student Award in the area of diversity and inclusion.

As WMU's graduate assistant for facilities, she assists in overseeing the Student Recreation Center and its facilities-related student employees. Morneau says interacting with those workers and helping them to develop their professional skills are some of her favorite aspects of the job.

She, too, takes opportunities to get out of her comfort zone and advance her skill set. As an example, she became an instructor for F45, a new fitness program the Student Recreation Center introduced last fall.

In addition, Morneau served as a student coordinator in 2017 for the annual NIRSA Region III Student Lead On, a student-led, student-run conference for students and professionals in collegiate recreation that is aimed at fostering opportunities for leadership, teamwork, networking and professional development. In that role, she planned, organized and executed the event, which is NIRSA's second largest conference.

Moreau reports that she made the decision to pursue collegiate recreation as a career after attending her first Lead On five years ago.

"I enjoy being able to give back to the association that helped me find my path in life. I want to thank those people who have mentored me thus far and shared their insights," she says. "I also want to thank my academic cohort, and the advisors and faculty members in the Department of Educational Leadership, Research and Technology for their unconditional support, both educationally and on a personal level."