Criminologist tapped for his expertise on video games and violence 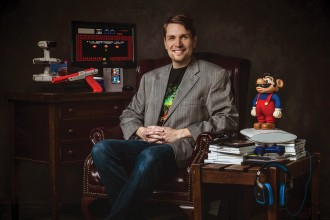 KALAMAZOO, Mich.—In the wake of recent high-profile mass shootings, Western Michigan University's Dr. Whitney DeCamp has been serving as an expert for media nationwide on the question of whether such violence is linked to teen video game use.

The answer to the question, he says, is that there is no real relationship between the two. The real predictors of violent behavior, his research shows, are whether a child comes from a safe home and whether a child has experienced violence in the home.

DeCamp, associate professor of sociology, an expert on criminology and director of WMU's Kercher Center for Social Research, has been reporting the results of his own extensive research on the topic, which includes five studies on video games, three of which focus on the relationship between violent video game content and behavior.  His findings contradict views expressed by some politicians, including the nation's president, who attribute an increase in mass shootings to the propensity of young men to play violent video games.

In recent weeks, NBC, Michigan Radio, Cleveland's CBS outlet and the publication PC Gamer have been among news outlets turning to DeCamp for data. Closer to campus, southwest Michigan arts and culture magazine Encore included a feature in its March issue detailing DeCamp's past and current research on the topic. That story can be found at encorekalamazoo.com/good-works/do-video-games-spark-violence.

DeCamp's past research has focused on students in the eighth-to-11th grades. He has a current study underway that looks at parental influences on whether a child plays violent video games. The parent-child relationship is critical, he says, to predicting violent behavior.

"People who have close positive relationships with their parents are a lot less like to engage in violence—regardless of whether they play video games or not," he told Encore.