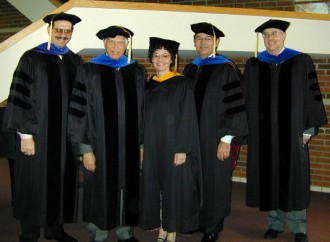 KALAMAZOO, Mich.—An early April induction of up to 81 top juniors and seniors will mark the 20th anniversary of Western Michigan University's chapter of Phi Beta Kappa, the oldest and most prestigious honors organization in the nation.

The April 10 ceremony will bring the total of members in the WMU chapter to nearly 1,500 since WMU was authorized in 1997 to shelter a chapter, formally installing the honorary society in 1998 during a spring ceremony. Securing the right to have a chapter was a 28-year effort at WMU and a goal of then-President Diether H. Haenicke, from the start of his 13-year presidency to the successful realization of the effort just months before his retirement.