Area Latvians to celebrate centennial with arts celebration at WMU 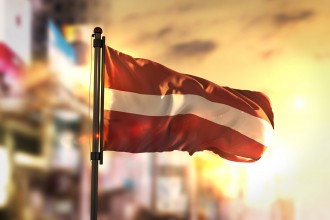 The Latvian Centennial Arts Weekend will feature lectures on Latvian art, literature and music, as well as concerts and exhibits.  The two days of arts events will culminate Sunday with a 3 p.m. Latvian Centennial Concert in the Dalton Center Recital Hall featuring the WMU University Chorale and the University Symphony Orchestra.

Organized by the Kalamazoo Latvian Association in cooperation with the WMU College of Fine Arts, the entire weekend celebration is made possible through support from the Ministry of Culture of Latvia.

All of the events are free and open to the public, except for a Saturday evening dinner and concert at the Kalamazoo Latvian Center, 100 Cherry Hill St. The cost for that event is $30 per person and $15 per student. The concert features Juris Kenins on the cello and Gunta Laukmane on the piano. Those wishing to attend are asked to register in advance at kalamazoolatvians.com/centennial-arts-weekend.

On Saturday, the celebration will begin at the Richmond Center for the Visual Arts, where two Latvian-related exhibits will be available from noon to 6 p.m. They include:

Lectures at the Richmond Center on Saturday include:

On Sunday, cellist Juris Kenins will give a talk at 1 p.m. in 2008 Richmond Center, focusing on Latvian musicians. Then at 2:30 p.m. he will give a pre-concert talk about the pieces that will be performed in the large concluding concert at the Dalton Center at 3 p.m.

This year marks the 100-year anniversary of independence for Estonia, Lithuania and Latvia, with yearlong festivities taking place in each Baltic country. After centuries of German, Swedish, Livonian Polish and Russian rule, the Republic of Latvia was established on Nov. 18, 1918, when it broke away and declared independence from Russia in the aftermath of World War I. In 1944, near the end of World War II, Russia again invaded Latvia and incorporated it into the Soviet Union. Latvia remained under Russian rule again until 1991.

The Kalamazoo Latvian Association was founded in 1950 by Latvian refugees from World War II. Most had narrowly escaped their homeland after the Russian invasion of 1944. There is now a third generation of Latvians continuing to gather and celebrate their culture in Kalamazoo.