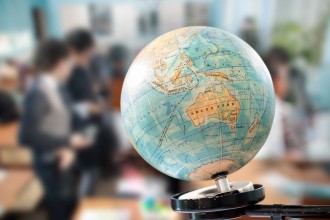 KALAMAZOO, Mich.—Middle-school geography whizzes from across the state will be on the Western Michigan University campus Friday, April 6, to compete for the Michigan National Geographic Bee state title and a chance to travel to Washington, D.C., for the national contest.

State bees are being held around the nation April 6, with 101 fourth- to eighth-graders slated to be on the WMU campus for a second round of competition after winning their local contests. The WMU event is scheduled for the Fetzer Center, with preliminary rounds starting at 12:30 p.m. and the final round set to begin at 2:15 p.m. to determine the Michigan winner.

Students from public and private schools in every part of the state will compete to determine the Michigan winner. Contestants this year include four students from the Kalamazoo/Portage area and eight from Grand Rapids and surrounding suburbs.

This is the 30th anniversary of the National Geographic Bee. To celebrate, the cash prize for the top three students in each state competition has been doubled.

The final round of the national event will be held at the National Geographic Society's headquarters and will be moderated by journalist and humorist Mo Rocca.

The second- and third-place finishers will receive $25,000 and $10,000 college scholarships, respectively. For more information on the National Geographic Bee, visit natgeobee.org.

For more information about the Michigan National Geographic State Bee being held at WMU, contact Dr. Lisa DeChano-Cook, a WMU associate professor of geography, who is the Michigan coordinator for the initiative. She can be reached at (269) 387-3536 or (269) 598-9532.