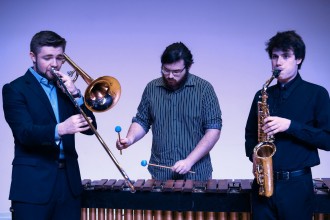 KALAMAZOO, Mich.—Western Michigan University's Symphony Orchestra will present its annual Concerto Concert, featuring the winners of the 2018 Concerto Competition, at 3 p.m. Sunday, April 22, in Miller Auditorium. The event is free and open to the public.

Featured performers include William Ford, trombone student of Steve Wolfinbarger, who will perform the "Concerto for Trombone" by Henri Tomasi. Alto saxophonist Andrew Keating, student of Andrew Rathbun, also will play the "Ballade for Alto Saxophone" by Henri Tomasi. And Evan Leffert, marimba student of Judy Moonert, will present Keiko Abe's "Prism Rhapsody for Marimba and Orchestra." The program will begin with Giuseppe Verdi's "Overture to La Forza del Destino" and end with Richard Strauss's musical homage to the legendary prankster "Till Eulenspiegel."

In an effort to enhance the safety of patrons, Miller Auditorium has adopted a bag policy consistent with those being implemented at performing arts centers across the nation. Bags and purses should be no larger than 4.5 inches by 6.5 inches or approximately the size of small handbag or clutch purse. Anything larger may be subject to search, and patrons may be asked to return larger bags to their vehicles. Backpacks of any kind are strictly prohibited. Direct questions regarding the bag policy or Miller Auditorium tickets to the Miller Auditorium Ticket Office at (269) 387-2300 or (800) 228-9858.

Ford is a graduate assistant in the School of Music working toward his Master of Music degree in trombone performance. He has enjoyed success by being selected as principal trombone and soloist with the 2017 American Wind Symphony Orchestra.

Prior to attending WMU, he earned a Bachelor of Music degree in jazz studies from James Madison University, where he graduated in 2016. At James Madison, Ford was selected to attend the 2014 Sulzbach-Rosenberg International Music Festival in Germany as a soloist and orchestral member. He was also a finalist representing the brass and percussion area in the 2016 Concerto Competition.

Ford has accepted a trombone teaching assistantship, beginning in the fall of 2018 at Louisiana State University, where he will be pursuing his Doctor of Musical Arts degree under the guidance of LSU trombone professor and 2011 WMU graduate Hana Beloglavec. His primary teachers have been Dr. Steve Wolfinbarger, Dr. Andrew Lankford, Dr. Chuck Dotas, and Bob Hallahan.

Ford is a Brother of Phi Mu Alpha Sinfonia Fraternity of America.

Keating moved to Kalamazoo from Ortonville, where he attended Brandon High School and performed in various ensembles, including concert band, jazz band, marching band, and musical theater pit orchestras. As a high school student, he studied saxophone at Grand Blanc Music with Scott Brady. He played in the Michigan State Youth Wind Symphony, the WMU All-Star Band, and the MSBOA All-State Band. During his last two years of high school, he began studying flute with Jessica Cech and piano with Julie Locks.

Keating is currently in his second year at WMU, studying saxophone with Dr. Andrew Rathbun. He has continued his flute studies at WMU with graduate assistants Heidi Keener and Pablo Sanchez. As a student in the multimedia arts technology program, he also enjoys studying music technology and working with electronic music. During his time at WMU, he has played in the University Symphonic Band and studio saxophone quartet.

Leffert is a percussion performance and music composition major currently completing his final year in both programs. Originally from Novi, he was an involved performer in his high school program, going on to perform in several honors ensembles. He won the John Phillip Sousa Award and was a second-place recipient for the soloist competition held by the Michigan Confederation of Music Clubs.

In the beginning of his college career, he went on to perform for two years with the Cadets Drum and Bugle Corps, later performing with the same group of percussionists at PASIC in 2016. During his time as a WMU student, Leffert's involvement was diverse and focused on immersion in the musical community. He performed dozens of student composer pieces, and was a member of the University Symphony Orchestra, Birds on a Wire, Symphonic Band, Percussion Ensemble and was involved in smaller chamber groups, as well. He also assisted or was involved in collaborations with Western Winds, University Jazz Orchestra, Advanced Jazz Ensemble, University Theatre, Gold Company and the WMU Trombone Choir.

Leffert became heavily involved in premiering works written by WMU composers, first performing consistently on the composition recitals, but then also going on to perform Nathan Haering's Resplendent Shards at a number of festivals, performing both in the Midwest as well as in Toronto, Canada. The following year, he went as a collaborating performer to the SPLICE Institute for electroacoustic music held at WMU in 2017, and the Sandbox Percussion Seminar held in New York City. He will be attending the same festivals again this year, and recently both performed a work by another WMU composer, as well as premiered his own for trumpet, horn and electronics, at the CHIME Festival held in Chicago earlier this April.

He is both a private instructor and teaches intermittently as a percussion technician for multiple schools in the area.