KALAMAZOO, Mich.—She may be best known on campus as the rider who leads Western Michigan University's Bronco football team into Waldo Stadium aboard a horse called Triumph, but Emily Stewart's equestrian skills have just been recognized as going far beyond that fall ritual.

Stewart, a WMU junior majoring in social work, has just qualified to compete in May at the Intercollegiate Horse Show Association's national championships in Harrisburg, Pennsylvania. Stewart will compete against top collegiate riders from around the country for the Cacchione Cup, which is awarded annually to the single top rider in the nation. 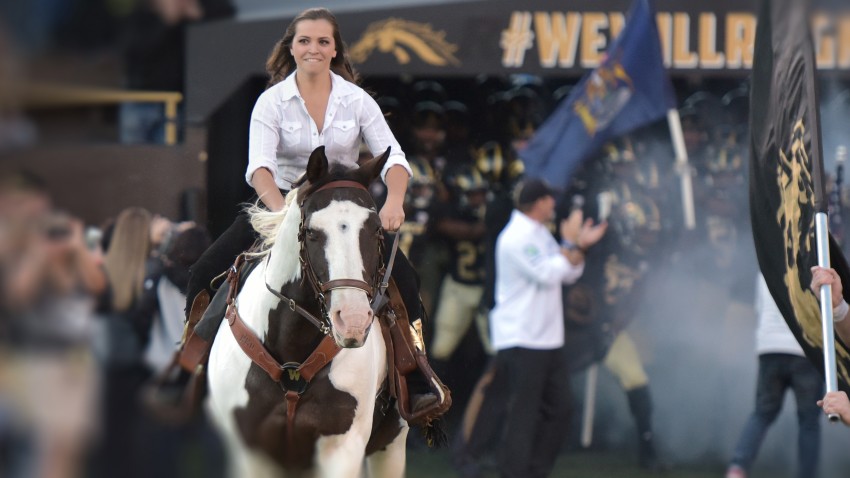 A member of the WMU Equestrian Team, Stewart was high-point rider in IHSA regional competition this school year against riders from 15 Michigan and Ontario schools in Region 4 of IHSA's Zone 6. With that placement in hand, she faced off against riders from additional Zone 6 schools in Michigan, Ohio, Kentucky, West Virginia and half of Pennsylvania. She was high-point rider in the Zone competition April 7 at Otterbein College, securing her right to compete in Harrisburg May 3-6.

Stewart is the daughter of the WMU Equestrian Team Coach, Rob Stewart, who runs R. Stewart's Hunters & Jumpers farm in Hickory Corners. This is the sixth time a member of the WMU Equestrian team has qualified for the national Cacchione Cup competition in the 26-year history of the WMU club sport. Among past team WMU qualifiers was Emily's older sister Katie Stewart, who also rode Triumph at Bronco football games and competed at IHSA nationals in 2014.

The Intercollegiate Horse Show Association began at New Jersey's Farleigh Dickinson University in 1967. Today, from its beginning with just two intercollegiate competing colleges, the IHSA is an organization that encompasses 40 regions in eight zones with almost 400 member colleges in 45 states and Canada—representing more than 9,000 riders in both Hunt Seat Equitation and Western Horsemanship and Reining.

The WMU team is a self-supporting registered student organization. Team members compete in five to eight horse shows annually, during the fall and spring semesters. The team won regional IHSA championships in 2015 and 2016. For more information, visit facebook.com/wmuequestrianteam.