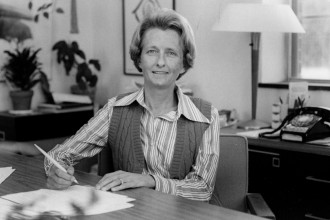 Helen J. Flaspohler, who for 19 years was instrumental in developing private fundraising efforts for Western Michigan University, died April 18 in Kalamazoo. She was 87.

Her tenure at WMU was characterized by close relationships with alumni and donors and an increasing focus on fundraising to meet such University needs as scholarships. She maintained longtime friendships with such alumni donors as Merze Tate and Gwen Frostic, and she played a major role in the 1984 launch of the Medallion Scholarship program, a privately funded effort that now annually provides 20 or more $60,000 scholarships to some of the nation's top incoming freshmen. During her tenure, she was responsible for raising millions of dollars in support of the University including what was then the single largest donation WMU had ever received.

She was instrumental in developing the WMU President's Club and the Academy of Volunteers, and she played a critical role in the University's first two capital campaigns—Partners for Progress and the Campaign for Excellence.

A graduate of Central Methodist College in Fayette, Missouri, Flaspohler taught high school for three years in that state before beginning a series of positions at the University of Missouri, Northeast Missouri State University and the University of Michigan as well as the Kalamazoo Public Schools, before joining the WMU staff.

She spent the last four years of her career at WMU serving as the first secretary of the WMU Foundation.  Following her retirement, she spent many years serving on the selection committee for the Medallion Scholars annual competition.

She is survived by her husband, Dr. Ronald Flaspohler, WMU professor emeritus of science studies; daughter Rhonda Overberger of Kalamazoo; sons John of Moorhead, Minnesota, and David of Hancock, Michigan; and five grandchildren.

A celebration of Helen Flaspohler's life will take place from 4 to 8 p.m. Saturday, July 14, at the Gilmore House, 1219 Short Rd., in Kalamazoo.