WMU alumni entrepreneurs reveal how they built their businesses

Read more stories about Bronco entrepreneurs in the spring 2018 issue of W Magazine.

KALAMAZOO, Mich.—Entrepreneurship is an adventure with a long list of challenges business owners gustily embrace by launching and trying to sustain an enterprise.

The need to take calculated risks, financial and otherwise, may be at the top of that list. But making the requisite pivot—or, more likely, pivots—at the right times is not far below.

As the market changes, when an essential employee departs, when a principal investor has a caveat or a potentially lucrative idea requires a change in the business model, mustering the wherewithal to reposition can be crucial to surviving and thriving.

In the W Magazine's Bronco entrepreneurs edition, several successful alumni business owners reveal how they got started and made key maneuvers to keep their entrepreneurial aspirations on course.

"The world of an entrepreneur and startup business is full of pivots," says Adam McFarlin, a 2008 graduate who founded Kalamazoo Candle Company four years ago in its namesake town and now sells products in 200-plus stores in more than a dozen U.S. states.

"You're constantly learning better ways to do things, learning from your customers, expanding production or learning new production techniques, and really learning what it is you want in your business. Even hiring people turns into a pivot when you find out someone has an underlying talent you aren't utilizing." 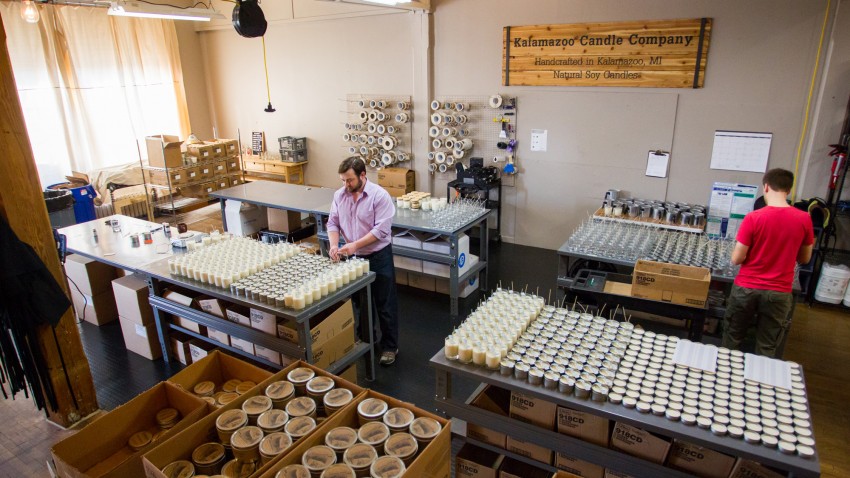 The prevalence of individuals willing to take the risks and make the pivots to build a business is a critical feature of our economy, and startup activity is a standard gauge of economic vibrancy.

"Young companies create an average of 3 million new jobs a year and have been responsible for almost all net new job creation in the United States in the last 40 years," Bobby Franklin, president and CEO of the National Venture Capital Association, noted in the Kauffman Foundation's latest index of growth entrepreneurship report.

As with many entrepreneurs, Brandon Zavala's first and biggest pivot was leaving a steady job to pursue his startup. When he did, it was kind of scary. For occasional encouragement, he would reflect on an experience he had while earning his master's degree in business administration at WMU.

In 2012, he and other students spent two weeks in Santiago, Chile, on a faculty-led study abroad trip. They observed large companies, but it was the resolve of the people behind the mom-and-pop-size enterprises in Santiago that stayed on Zavala's mind.

"That was really the moment that changed me, honestly," he says. "They really didn't have anything, and they started businesses. I saw that and said, 'It is possible.'"

In 2015, Zavala's possibility became a reality when he started Apollo Peak pet beverages with products that "went viral" in certain circles. The company posted $500,000 in sales its first year.  He's also made an appearance on ABC's "Shark Tank."

"But you figure it out, and that's the best thing. It pushes you to work harder to capture what you want to do. We added new products and were able to appeal to new stores to bring that figure back up."

Read more about the great work being done by WMU students, faculty, staff and alumni in the W Magazine.