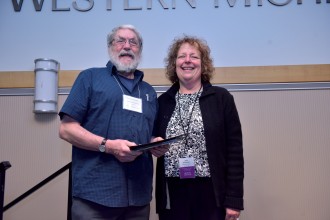 Richard Firth Green, a Humanities Distinguished Professor of English Emeritus at Ohio State University and the author of three books and numerous articles on the social life, law, and literature of late Medieval England, is the winner of the 2018 Gründler Prize for "Elf Queens and Holy Friars: Fairy Beliefs and the Medieval Church." This year's prize, which comes with a $1,000 cash award, was announced at the 53nd International Congress on Medieval Studies—one of the world's largest gathering of medieval scholars, which is held annually in Kalamazoo on the WMU campus.

The prize is named for the late longtime director of WMU's Medieval Institute and has been awarded annually since 1997. It is designed to recognize a book or monograph on a medieval subject the selection committee determines has made an outstanding contribution to the field. Authors from any country are eligible for the prize, and nominations are accepted from readers or publishers.

Green's book focuses on an important aspect of medieval culture that has been largely ignored by modern literary scholars. He starts with the assumption that major cultural differences during the Middle Ages were less about the amount of wealth a person had but more about how educated they were. He explores the church's systematic demonization of fairies and details accounts of the church's attempts to suppress or redirect beliefs in such things as alternative versions of the afterlife.

"'Elf Queens and Holy Friars: Fairy Beliefs and the Medieval Church' is a very important book for understanding the culture that produced medieval romance and vernacular literature more generally, as well as for understanding the aesthetic culture of the later Middle Ages, and is well deserving of the 22nd Otto Gründler Book Prize," said Dr. Jana K. Schulman, director of WMU's Medieval Institute, in reading this year's award citation.