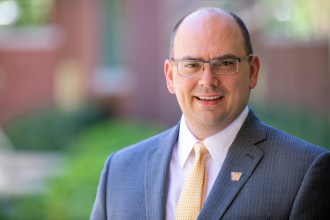 Proudfoot, interim senior vice president for marketing and communications at the University of Arizona, was one of three final candidates in the nationwide search to fill a newly created position at WMU charged with providing the vision and the leadership to advance institutional marketing and communication, leading the Office of University Relations.

"As we move Western Michigan University forward, 'transformational change' has been our guiding principle and our goal for every major aspect of this institution. I believe Tony Proudfoot has the transformational ideas, experience and thinking to reshape and elevate our efforts in marketing, brand positioning and communication," Montgomery says.

"Our challenge is to make WMU the university of choice for this region and beyond. Tony's results-oriented approaches and deep expertise in higher education marketing will be crucial to this work," he says.

"I am honored and humbled to be entrusted with the responsibility of strengthening the University's brand. WMU's strengths were apparent almost immediately when I stepped on campus," Proudfoot says.

"Reimagining how we present those strengths to the world will enable WMU to become an undisputed first choice. I look forward to working collaboratively across the University to focus our greatest assets into a clear, compelling voice that attracts attention, students, research talent and financial support."

Since January 2015, Proudfoot has served at the University of Arizona. He joined the 43,000-student, Tucson-based school as associate vice president for marketing communications and brand management, operating as UA's senior marketing strategist and overseeing $3 million in resources and a staff of 18. This past January, Proudfoot was tapped to additionally serve as the university's interim senior vice president for marketing and communications, greatly expanding his budgetary, staff oversight and leadership responsibilities.

During his more than three years at UA, Proudfoot created a new brand governance model and established new brand position platforms for most of the institution's colleges. He also has provided counsel and leadership to more than 250 marketers across campus to bring coherence to the university's brand and enhance its competitive advantage.

Prior to leading marketing at UA, Proudfoot spent eight years at his alma mater, Ball State University, where he was associate vice president for marketing and communications, overseeing some $4 million in resources and a full-time staff of 36. At Ball State, he developed and led the university's brand strategy as well as integrated marketing and communications strategies for admissions, development, legislative affairs, alumni affairs, colleges, departments and university initiatives. The challenge at the Muncie, Indiana, university was to reposition the institution to compete. During Proudfoot's eight years, the university saw record increases in enrollment, student persistence, graduation rates and philanthropic support.

Earlier in his career, Proudfoot moved up the ranks in marketing in the Indiana University system over a 12-year period. He started as a marketing research analyst in 1995 and was ultimately elevated to executive associate director of the system's Office of University Marketing and Communications. During his IU tenure, he led the system's first brand alignment, established partnerships with campuses beyond the flagship campus in Bloomington and led marketing research for all eight campuses.

"I'm excited to get started and work with every member of the Western Michigan University family," Proudfoot says. "There is an undeniable affinity for the University that is easily felt in just a short time there. My vision is to extend that deep emotional connection to help the University thrive in an increasingly competitive environment. I'm confident we will thrive together."

Proudfoot earned a bachelor's degree in psychology from Ball State in 1995. He and his wife, Natalie, have two daughters.