KALAMAZOO, Mich.—Life doesn't always go exactly according to plan. Such was the case for Western Michigan University alumna Jennifer (Markby) Soffin, founder of The IN Coast, a lifestyle brand dedicated to building pride in Northwest Indiana.

Being an entrepreneur wasn't in Soffin's life plans. It's something she felt compelled to pursue when her genuine love and pride for her hometown spurred a fun—and profitable—idea.

In July 2016, Soffin's family hosted friends from California. Their guests enjoyed their time on Lake Michigan so much that they wanted souvenirs featuring what they called "the Indiana coast." That is when the idea for The IN Coast hit Soffin. And once it did, there was no turning back.

"Knowing I couldn't shake [the idea] led me to pursue it and build a business around it," Soffin says. 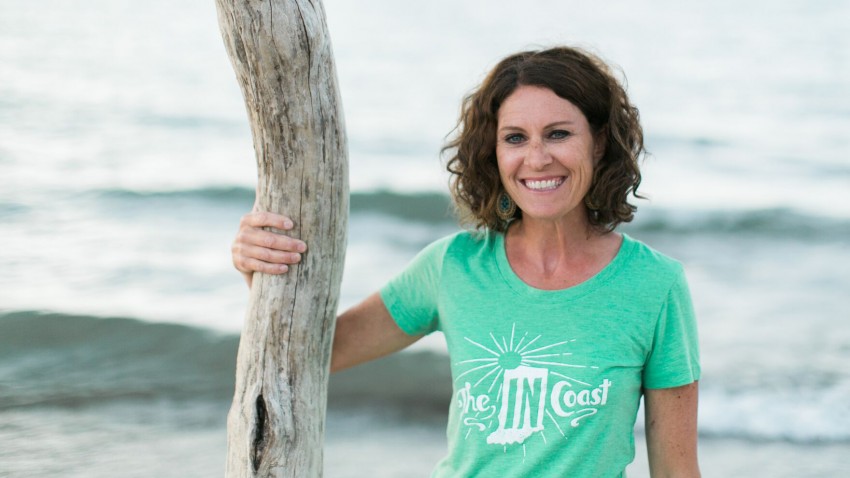 Positioned at the southernmost tip of Lake Michigan, Northwest Indiana boasts 45 miles of Great Lakes shoreline and is home to the Indiana Dunes. The region features a string of sandy beaches, hiking and cycling trails, and abundant dining, shopping and entertainment options.

Soffin believed an authentic local brand that celebrated and strengthened Indiana's lakeshore community would be well-received–and it was. In its first four days of business, The IN Coast sold its entire inventory of 84 T-shirts. Now, the company sells everything from apparel and hats to glassware, decals and bandanas.

A 1998 graduate of the food marketing program, Soffin says WMU's dedicated faculty and corporate partnerships helped her develop a diverse skillset that paved the way for her as an entrepreneur.

"Western Michigan University has so many incredible relationships with different companies," she says, "and we, as students, were able to experience so much."

Equipped with the knowledge and skills gained from those experiences—and fueled by a healthy dose of hometown pride—Soffin is proving that it's possible to build a profitable business that positively impacts the community. Sometimes, she says, the key to success is waiting for it.

"Entrepreneurs are doers by nature and want it to happen now, but great ideas require lots of patience," she says. "So if you've got something, rest up, be patient, surround yourself with good people, believe in yourself and go for it!"