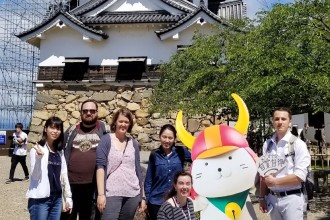 Joshua White, second from left, and other language students pose with the mascot of Hikone, "Hikonyan," at Hikone Castle.

KALAMAZOO, Mich.—A Western Michigan University student from Paw Paw is in Hikone, Japan, studying Japanese thanks to a U.S. Department of State scholarship.

Joshua White, a graduate student in electrical engineering, received a full scholarship from the state department's Critical Language Scholarship program to participate in an eight-week summer course at the University of Shiga Prefecture in Hikone.

The scholarship program is part of a federal effort to expand the number of Americans studying and mastering critical foreign languages. Those who receive these scholarships gain critical language and cultural skills that enable them to contribute to U.S. economic competitiveness and national security.

White is one of about 550 competitively selected American students at U.S. colleges and universities who received a CLS award in 2018. Recipients of the awards include students from more than 230 institutions of higher education, including public and private universities, liberal arts colleges, minority-serving institutions and community colleges.

White plans to continue on and obtain a doctoral degree in electrical and computer engineering, focusing on research in electro-neurophysiological interfacing. Eventually, he wants to move to Japan and work on developing advanced prosthetics that interface directly into the human nervous system to help improve the quality of life for amputees. 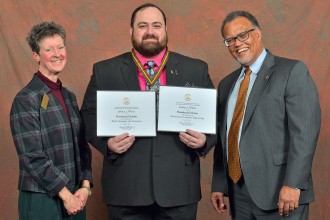 In addition, White was a member of WMU's Lee Honors College and earned the University's Yukiko Murakami Scholarship, which allowed him to study abroad from September 2015 to August 2016 at Keio University in Tokyo. While studying in Tokyo, he also volunteered to assist teaching English to students at Adachi Daijuu Middle School.

The program includes intensive language instruction and structured cultural enrichment experiences designed to promote rapid language gains. CLS scholars are expected to continue their language study beyond the scholarship and apply their critical language skills in their future careers.

Critical languages are those that are less commonly taught in U.S. schools, but are essential for America's engagement with the world. The scholarship program plays an important role in preparing U.S. students for the 21st century's globalized workforce. Along with their contributions to the nation's economy and labor force, CLS scholars serve as citizen ambassadors, representing the diversity of the United States abroad and building lasting relationships with people in their host countries.

Learn more about the Critical Languages Scholarship and WMU's international programs and services.