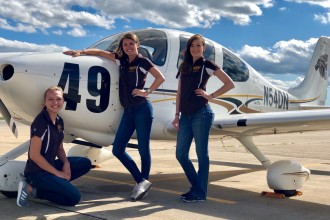 Pilot Lauren Quandt of Grosse Ile, co-pilot Shelby Satkowiak of Mio and teammate Kelly Erdmann of Southfield finished the more than 2,600-mile course June 19 to 22 against an aircraft-specific handicap, rather than head-to-head against other competitors.

Last year, WMU ranked fifth in the collegiate race and 10th overall. The University first entered a team in 2000 and raced every year through 2008, returning to the competition in 2014. The first and only other time a WMU team placed in the top spot for the collegiate division was 2005 when it also placed eighth overall.

"The 2018 Air Race Classic was a very challenging race that presented many learning opportunities," says Quandt, a senior double majoring in aviation flight science and aviation maintenance technology who participated in the race for the second year.

"It was really great to share the experience with so many talented and inspiring women," adds Satkowiak, who graduated in April with a bachelor's degree in aviation flight science and competed for three years.

Erdmann, a junior double majoring in aviation flight science and aviation management and operations, calls her first year on the team "an amazing experience where teamwork and decision-making skills really come together."

The 2018 race, which has its roots in an event that began in 1929, followed a zigzag route that started in Sweetwater, Texas, and ended in Fryeburg, Maine. Racers stopped or did flybys at checkpoints in Oklahoma, Nebraska, Minnesota, Illinois, Indiana, Michigan, Ohio and New York. The 10 checkpoints on this year's race included one in Michigan—the Wexford County Airport in Cadillac.

Of the 52 teams and more than 100 women of all ages competing, 20 teams this year represented 17 aviation colleges around the nation.

The Air Race Classic, part of a long tradition of women's air races, dates back to the days of Amelia Earhart and each year features women pilots from across the nation flying fixed-wing aircraft using visual flight rules. Air racing became popular in the 1920s, but women pilots were forbidden to race against men, so they started their own race.

The high-profile race is billed as "the only all-woman, cross-country event." Since many types of planes are used to compete in the race, each plane is given a handicap in ground speed, and the goal is to have the actual ground speed be as far over the handicap speed as possible. The pilots have the leeway to play the elements by holding out and timing their travel for better weather or wind conditions, for instance. The objective is to fly the "perfect" cross-country course.