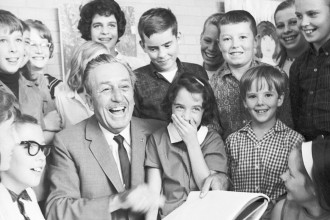 Walt Disney signs autographs for children during a visit to the Kalamazoo Institute of Arts in 1964.

KALAMAZOO, Mich.—By proclamation, the city of Kalamazoo has declared Thursday, July 12, 2018, Walt Disney Day in Kalamazoo, recognizing both a Western Michigan University travel course that explores Disney's legacy and the legendary entrepreneur's visit to the city almost 54 years ago.

The course, Walt's Pilgrimage, was developed by Dr. Christopher Tremblay as part of Lee Honors College's Study in the States program. Each year, Tremblay takes a group of students on a cross-country journey that begins at Disney’s birthplace in Chicago and concludes in California at his gravesite.

This year's cohort departs Thursday. Over nine days, the group of eight students and Tremblay will travel through Illinois, Missouri and California, stopping at more than 40 destinations related to Disney's life and times.

"Walking through Walt’s footsteps from the start of his life through the end of his career is a one-of-a-kind experience because we see the places that were the origins of his creativity,"says Tremblay, who, in addition to creating and teaching the honors course, wrote the 2017 book "Walt's Pilgrimage: A Journey in the Life of Walter Elias Disney." The book features a chapter about Disney's visit to Kalamazoo.

On their trip following his footsteps, students will be exposed to the creativity, perseverance, successes, failures and impact of the celebrated animator, entrepreneur and producer who set the foundation for the animated feature industry as well as for the theme park business.

"My students are always in awe of his humble beginnings while also honored by the legacies that he left behind," Tremblay says.

The city's proclamation—which notes that Disney traveled to Kalamazoo in September 1964 to visit Gilmore Museum founder Donald Gilmore—calls the WMU students "ambassadors of Kalamazoo." It also encourages residents to celebrate Disney's legacy and connection to the city.

Follow the students' journey on social media: facebook.com/waltspilgrimage, @leehonorscollege on Instagram, and @westernmichu on Snapchat. Students will be using the hashtag #waltspilgrimage.