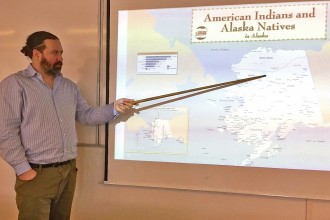 KALAMAZOO, Mich.—With melting ice opening up access to new trade routes and natural resources, many policymakers as well as ethicists worry that political and economic competition will lead to more conflict in the Arctic region.

They include Dr. Fritz Allhoff, a professor of philosophy at Western Michigan University, who recently helped stage an international workshop that developed realistic scenarios for what future Arctic conflicts might look like.

The event, Emerging Arctic Conflicts, Law and Ethics, was held June 18 and 19 at the University of Iceland. It attracted delegates from several Arctic countries and included a cultural exchange during which attendees had a chance to meet with Iceland's President Guðni Th. Jóhannesson.

During the workshop, Allhoff gave a presentation on "Civilian and Indigenous Affairs" that addressed climate change. He co-organized the event while serving on UI's political science faculty as a Fulbright Specialist from June 1 through 30.

The competitive Fulbright Specialist Program pairs highly qualified U.S. academics and professionals with host institutions abroad to conduct two- to six-week projects that support the host institution's priorities and goals. Allhoff's Fulbright project focused on cybersecurity and critical infrastructure and was funded as a collaboration between the U.S. National Science Foundation and the Fulbright Specialist Program.

Allhoff notes that as ice melts, constricted waterways are opened up, creating new and faster trade routes as well as gateways to potentially lucrative energy and mineral reserves.

"The Arctic is likely to become a geopolitical flashpoint, but probably more in terms of grabs for soft power—like shipping lanes and natural resources—rather than through overt militarization," he says. "Our workshop drew from international and interdisciplinary expertise to try to develop conflict scenarios in this regard. Having specific scenarios to wargame, rather than more abstract principles, really helps to see the strategic depth of the Arctic."

Workshop organizers plan to use their recently developed scenarios to stage wargames or similar events for the international community. These events will take into account the likely use of such 21st-century tools as cyberweapons, robotics, artificial intelligence and geoengineering. Reckless or malicious use of such tools could fan the flames of war as well as have unintended consequences for multiple nations and the environment.

"In this domain, it's important to get the ethics, law and policy rolled out early: we don't want to be playing catch-up after a bunch of Arctic development ensues," Allhoff contends. "And so wargaming allows us to think through those dimensions, as well as to interact with high-level government and defense personnel, with the hopes of convincing them of the importance of forward thinking."

The workshop featured an intensive discussion of conflict scenarios facilitated by a diverse group of invited presenters selected from academia, industry and government. Among the questions debated were:

Co-organizing the event were Dr. Patrick Lin, a professor of philosophy at the California Polytechnic State University and director of the Cal Poly Ethics + Emerging Sciences Group, and Dr. Silja Ómarsdóttir, a UI political science lecturer who is a board member and former director of the UI Institute of International Affairs.

Allhoff is an adjunct community professor in the WMU Homer Stryker M.D. School of Medicine's Program in Medical Ethics, Humanities and Law as well as a former fellow of the Center for Law and the Biosciences at Stanford Law School.

His latest book is titled "Terrorism, Ticking Time-Bombs and Torture." He also has co-edited "Binary Bullets: The Ethics of Cyberwarfare" and "The Routledge Handbook of Ethics and War: Just War Theory in the Twenty-First Century." In addition to his academic work, his popular work has been featured in such publications as Slate, The Atlantic and The Huffington Post.

Allhoff earned a doctoral degree in philosophy from the University of California-Santa Barbara as well as a law degree from the University of Michigan. No stranger to cold-weather climes, he clerked for a year for the chief justice of the Alaska Supreme Court and now does fieldwork with native communities in the state. He also is a founding member of the Asia Pacific Chapter of the International Society for Military Ethics and serves on the editorial board of the International Committee of Military Medicine.

Listen online to a Scholar Talk that reveals some of Allhoff's thoughts on ethics, technology, neuroscience and criminal law. Learn more about  WMU and the Fulbright Program online.