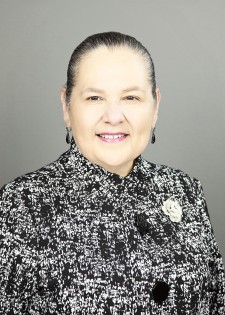 KALAMAZOO, Mich.—Western Michigan University's multicultural affairs director received El Concilio's 2018 Quetzalcoatl Award in recognition of her stature as a professional Latinx leader who has been working, contributing, supporting and advocating for the well-being of the Latinx community in Kalamazoo. Diana Hernández received the accolade during an award ceremony as part of the Nuestras Raices Gala Sept. 28. During the ceremony, U.S. Rep. Fred Upton read a state legislative proclamation passed in her honor and facilitated by state Sen. Margaret O'Brien.

In announcing its award, El Concilio cited Hernández for her passionate support of the area's Latinx community as well as advocating for WMU's Latinx students so they can succeed in college. Under her leadership, WMU has secured two federal College Assistance Migrant Program grants totaling $4 million. This grant program supports first-generation undergraduate students who are migrant or seasonal farmworkers. WMU was awarded $2 million in 2012 and another $2 million in 2017.

El Concilio, formerly the Hispanic American Council, is a nonprofit, community-focused organization that seeks to help Latino residents support their families, contribute to society and appreciate their cultural significance in the local region.

In addition, Hernández has been selected as one of the Top 50 Latinas in Michigan by the governor-appointed Hispanic/Latino Commission of Michigan. The honor recognizes women who have had a commitment to lifelong learning and expansions of their own personal and professional resources. Nominations came from across the state, and honorees were recognized Oct. 12 during the Statewide Hispanic Heritage Month Celebrations held in Saginaw.

Hernández is a member the American Associates of Hispanics in Higher Education, Advocates for Latino Student Advancement in Michigan Education, National Congressional Hispanic Caucus Institute and Hispanic American Council in Kalamazoo. She also has volunteered as a mentor for Big Brothers Big Sisters, and served on the boards and committees for several groups, including the YWCA, Girl Scouts and Kalamazoo Public Schools.