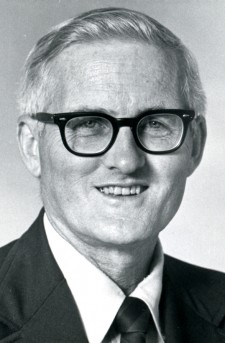 Boyle joined the Registrar's Office in 1965 and retired in 1993 after more than 27 years of service.

He served as coordinator of scheduling and space utilization and then as director of registration before being named registrar in 1975. During his tenure at the University, he oversaw the introduction of telephone registration, an Integrated Student Information System and other advancements that improved registration and student records management.

Boyle received a Distinguished Service Award from WMU in 1986. In announcing the award, the University cited him for having worked with great energy, dedication and care, and, as registrar, implementing a system for registration and record keeping that put Western in the top 5 percent of the nation's universities.

He also was praised for the fairness and objectivity with which he administered WMU's academic policies. In fact, his expertise in records management, including the monitoring of student athletes using NCAA guidelines, gave him a national reputation in his field.

While at WMU, Boyle lived in Vicksburg, Michigan, and was active in civic and community affairs. Among other roles, he served as mayor of the town and president of the Vicksburg Community Schools District Board of Education. Most recently, he was a resident of Scotts, Michigan.

Memorial gifts may be made to the Vicksburg Foundation, Vicksburg Rotary or St. Martin of Tours Catholic Church.