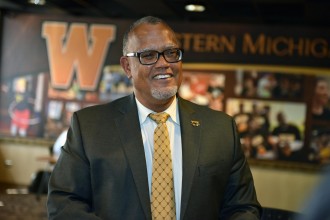 KALAMAZOO, Mich.—At its Dec. 12 meeting, the Western Michigan University Board of Trustees unanimously approved a positive annual performance evaluation for WMU President Edward Montgomery and also approved a 2.5 percent pay increase recognizing his accomplishments. The increase brings his salary to $461,250.

As part of their assessment, trustees gathered input from a variety of stakeholder groups, including students, deans, senior staff and the Faculty Senate, board Chair Jeffrey Rinvelt said.

The Board of Trustees singled out a number of Montgomery's achievements since he was appointed Aug. 1, 2017.

Achievements Cited by board