WMU a leader in offering learning by virtual reality 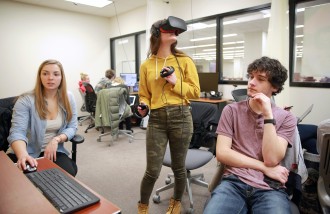 (Left to right) Sophomore Katie Fairman of Chicago, junior Therezine Corcoran,  of Lapeer, Indiana, and freshman Jacob Zufall, of Portage, using VR in the technology in the arts course. Teams work on a project to create VR environments with a sense of place and emotion. Photo by Mark Bugnaski

KALAMAZOO, Mich.—Travel the world for history class and actually see the culture. Practice surgery or accurately design a 3D car.

Western Michigan University offers significant opportunities in the areas of teaching, learning and research at one of the largest virtual reality laboratories at an institution of higher education.

The VR Lab at WMU Libraries was started to explore this revolutionary technology as a collaborative effort of the Office of Information Technology and Waldo Library. Opening the door to broad collaborative possibilities and feeding the curiosities of varied audiences, users have experienced both the entertainment and educational side of VR content in the lab's first year.

"Libraries are in a huge state of change with technology," says Lou Ann Morgan, senior marketing specialist for University Libraries.

As an exciting, even sensory method to foster learning in the digital age, virtual reality labs have emerged as a hands-on educational tool. However, few colleges and universities have embraced the technology to the extent WMU has, Morgan adds.

With seven computer stations and three rooms in the lower level of Waldo Library, WMU's leadership in this cutting-edge area of technology and learning has been noticed across the country and even the world.

"Our sense was that this is something we needed to start now and, so far, we've been ahead of the curve," says Kevin Abbott, director of the VR development studio, who brought his vision of the VR lab to Office of Information Technology leadership.

He adds that WMU has had inquiries from eight other colleges, including as far as Saudi Arabia.

"No other university seems to be offering the types of VR workshops we are." 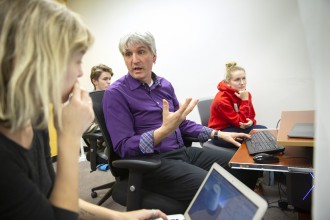 Kevin Abbott, interactive media specialist, works with students in the VR lab during a technology in the arts course. Photo by Mark Bugnaski

Exposing the WMU community to virtual reality is the first step toward appreciating how it can be used in the classroom and beyond, he adds. To take advantage of what VR has to offer, it's crucial students, faculty and instructors have the opportunity to experience it for themselves.

"If you ask educators out of the blue how VR can help them in the classroom, most don't have an answer because they have never experienced the level of immersion that our VR systems offer. But when you put a headset on them, the exposure generates a lot of creative ideas and educational opportunities," Abbott explains.

Many faculty members have already embraced the potential of VR. A Lee Honors College course focuses on technology in the arts and uses the VR Lab to create an experiential environment conveying a sense of place and emotion. A multimedia journalism course has 360-degree documentary video, allowing viewers more interaction.

Kathryn Wagner, WMU associate professor of theatre, brought her Period Styles of Design class to the VR lab for the first time fall semester. Students "explored" architecture from all over the world, viewing many of the buildings in 3D at street level.

"It was fun, and they were able to get out of the traditional classroom," she says. "It was also good for many of them to 'travel' to these locations, as not all students have the ability to travel in person. I definitely plan to bring the class to the VR Lab in the future and hope to find other ways to use the lab for other classes, as well."

WMU student Leah Barton of Troy, Michigan, was the first student employee to work in the lab and has seen its popularity and usefulness grow.

"The virtual reality lab is becoming a growing environment for learning," says Barton, a senior majoring in business marketing and sales with a minor in multimedia arts technology.

"More and more students, faculty, and staff are becoming aware of the possibilities that they can create from implementing the technology in their education plans."

She adds she is excited to be on the forefront of VR use at the University.

"Western Michigan University is a forerunner in virtual reality being used for education," she says. "As an industry that has only begun to scratch the surface of things it can achieve, I am proud to be a part of the growing potential it has to shape the future."

Community groups also have taken advantage of the local resource, sponsoring summer programs such as the Kalamazoo County Parks and Recreation "All Things Possible" Program, IT Girl Conference, library staff competitions and an autism program.

During spring semester, the lab is planning more workshops, a series of online videos and greater outreach to faculty members. 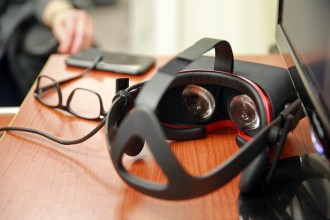 The VR Lab in the basement of Waldo Library has open hours every day of the week except Friday. Photo by Mark Bugnaski

“Imagine walking into a 14th century manuscript virtually, or a map growing into a 3D space that was just plotted from your research data in layering geospatial software. These are some of the possibilities for teaching and learning,” says Scott Russell, library IT director and co-director of the lab.

"The potential is extremely broad," adds Abbott. "VR is a new form of media that holds incredible promise in fields across the educational spectrum."

With seven stations and more than 45 titles on each workstation, students, faculty and the public choose from such topics as 3D modeling and art, nursing procedures simulation, 3D tours of destinations around the globe during present day or historical settings—and some surreal, such as a simulation of being an unborn fetus inside the womb.

Of course, there are also games. Users can train for a mission as a super spy or as a space pirate, fly like an eagle over Paris in the future, go rock climbing or fight zombies.

But don't assume gaming is a sedentary and solitary pursuit. Russell says the stereotype of a person sitting on a couch in the basement is far from the truth.

"Some of the games are so physical that we had to put a fan in the main room to keep it cool," he says. "The default is to look at gaming as unhealthy. But there's another piece—there are collaborations and people reaching out to other people to play as a team. The goal of these entertainment titles is to inspire creativity."