K-9 Brax and K-9 Oso, both less than two-year-old male German shepherds, are Kalamazoo County's first and only explosion-detection canines. The dogs and their handlers, WMU officers Travis Cable and Michael Lininger, trained for three months at a facility in Taylor, Michigan, and received dual certification for both explosive detection and patrol in mid-January.

"It has been a lot of work for the officers, but I think that they both would agree that it is a labor of love," says WMU Public Safety Chief Scott Merlo, adding that bringing a K-9 program to WMU has been his goal since he started at the University four years ago.

The dogs also will be available to other agencies in Kalamazoo County.

"There is always an unfortunate need for explosive-detection K-9s," he says. "Most athletic events, especially football games, utilize a bomb-detection team to sweep stadiums prior to events, and there have been requests the last few years for this service."

Law enforcement agencies in Kalamazoo County and the surrounding areas already work closely together. The explosive-detection K-9 unit is "another tool in our arsenal," says Merlo. "We wouldn't be successful without the assistance of each other."

Besides explosive detection, the dual-purpose dogs will be used on patrol.

"Our goal is that the dogs will be used to enhance our community policing efforts, and the students will come to accept and love the dogs. We want our community to feel comfortable around the dogs, and we encourage them to interact with the officers," Merlo says. 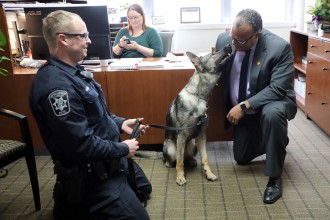 The dogs live with the officers in their homes, travel with them to work and train several days a week—K-9 Oso with Officer Cable and K-9 Brax with Officer Lininger.

They have one day a week "to relax and be a normal pup a little bit and not so regimented," says Cable. "But, at same time, his training is his play, (he) loves it. And he loves meeting new people and getting out around campus."

The dogs work as a team with the officers.

"We end up relying on each other when we are working. One example of that is bomb-detection work. Obviously, I can't smell what he can smell," Lininger says, adding that when Brax detects the odors of explosive chemicals, "his breathing changes, his whole body language changes. And I'm able to read that."

The canine rookies can be spotted with the officers as they ride in a marked police Chevrolet Tahoe that has "K-9" written on the sides and also will accompany the officers on walks so students can meet them.

The officers request that people ask if they can interact with the dogs before they approach them, though.

"It's always nice to ask first. We're definitely going to be a big part of the community, and we love to meet people... But maybe we are in the middle of working, and it's not a good time," Cable says.

More likely than not, if you ask, the handlers will allow people to approach the dogs.

"Petting is OK, and if there's something I would be concerned as a handler, I'd let you know ahead of time, especially with little children," Cable says. "Most of (the dogs') focus is going to be on the community policing aspect and trying to give a route to feel comfortable talking to police officers."

"Most people are fascinated by dogs," adds Merlo. "We want our WMU community to adopt these dogs, to approach these dogs, and to come to love them and respect them as we do."

The energetic animals were introduced to WMU President Edward Montgomery during their official start of duty last month.

"They were fantastic dogs. I really liked the chance to be able to interact with them. They had great dispositions," Montgomery says.

He notes that comfort animals have shown to have amazing psychological effects on people and make them feel relaxed and less tense.

"Having a dog with a police officer makes them more approachable. I think that's one of the benefits," adds Montgomery. "These dogs will certainly do that."

Merlo added that WMU does not plan to add additional K-9s at this time.