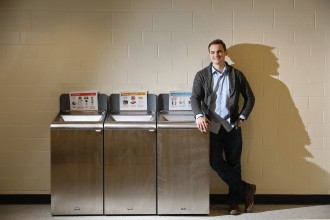 The psychology graduate student immersed himself in recycling habits for a full year, conducting research for Newell Brands and its Rubbermaid Commercial Products brand.

"People don't traditionally view psychologists as the ones running these programs," says Turske.

The study, which Newell Brands Associate Brand Manager Catie Cartee believes to be among the first of its kind, could give the company a leg up in the commercial products recycling arena.

"It gives us much more credibility because the study was developed and executed by a third party," Cartee says. "The partnership we have with Western Michigan University is very valuable, being a research-focused campus. The reputation of Western is something we wanted to capitalize on."

Turske's passion for sustainability initially piqued his interest in the project.

"When I found that there was a call for researchers to actually use the skills I've developed through graduate school to make an impact on the sustainable world," Turske says, "that was a big pull."

Newell, which has a location in WMU's Business Technology and Research Park, wanted data to support the optimum placement of recycling centers in a building.

"We wanted to see which placement and quantity of recycling centers would yield the highest recycling rates and lowest contamination rates," says Cartee.

The research also had a practical application on campus. Lu DeBoef, working in WMU's Office for Sustainability at the time, wanted to identify ways to limit contamination. 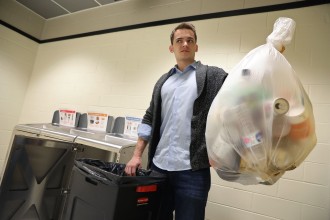 Turske and his team of researchers spent a year digging through trash to examine recycling habits in Wood Hall.

Turske developed four research questions to explore during the study:

He and his team of more than a dozen student researchers began their work in the summer of 2017, examining recycling bins inside Wood Hall.

"Wood Hall is unique. We looked at the first and second floors and they're almost identical. So, it made for a good research control," says Turske. "If the layout was different, it would be a confounder in the data, which would mean we couldn't make as strong of statements."

Strong research, it turns out, also produces strong odors. In order to find out what people were tossing into bins, Turske and his team had to sift through trash, piece by piece, and document it. The team worked closely with custodians, who essentially became researchers themselves. They would gather the waste from pods throughout the building and dump it onto the loading dock in clusters.

"Every day we would sort through everything to rate it for accuracy. You lost your sense of smell, which was good," Turske laughs. "It made it easier to sort."

Sometimes the trash told a story.

"You could tell when someone had a really bad test because all of their notes would be in the paper bins."

In addition to documenting the contents of bins, Turske and his team shifted the placement of recycling pods throughout the building every couple of weeks.

"At 11 p.m., we would physically move the bins ourselves on chairs," recalls Turske. "We were only questioned by the cops once, who were really confused about what we were doing."

The research team documented the number of pods per floor during each phase, as well as their location in respect to entries and exits and the type of recycling prompt used (text or images).

The year-long project turned into a much larger undertaking than Turske expected. A small price to pay for solid research.

"It's not always clean, but it's fulfilling," Turske says. "Because being able to see every phase of this project…you could see the science unfold in front of you, which was very validating." 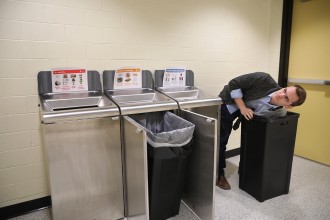 One of the main findings of Turske's study involved signage placed near recycling centers. Data showed people were more likely to recycle—and do so correctly—when a sign above the bins featured pictures rather than just text to demonstrate  what people could dispose of in the containers.

"If you're in a hurry and don't have time to read the text, you'll just throw something away," says Turske. "The pictures are a little larger. You can see them from afar and kind of preemptively know what's supposed to go where and recycle more efficiently."

"We found making recycling easier makes people want to do the behavior more, which is great."

Another aspect of the study analyzed the number of bins needed to maximize recycling efforts and efficiency, something important to both Rubbermaid Commercial Products and WMU.

"We found that when we had six bins (per floor), trash started to accumulate in the bathrooms and classrooms, which is not good for custodians because it takes time out of their day to clean," says Turske. "It also makes Western look bad if trash is everywhere."

The team found no difference between the amount of waste captured by nine or 12 bins, determining the smaller number to be the "sweet spot" for recycling.

They also learned bins placed near entrances and exits were most effective, and that the material Rubbermaid Commercial Products uses for its bins also decreased recycling contamination.

"People wanted to interact with the RCP bins more due to the fact that they looked nicer, they seemed sleeker and were more uniform," says Turske. "They said they would actually feel bad if they didn't recycle properly." 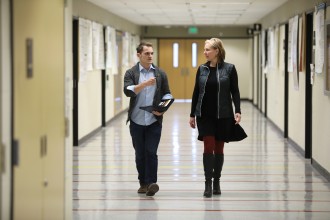 Newell plans to use Turske's project to train its field team.

"Oftentimes, distributor partners come to us and ask us, 'My customer wants to implement a (recycling) program. What do they need?'" says Cartee. "This helps us give a more educated, data-based answer."

"It was truly a win-win all the way around," says Bob Miller, associate vice president for community outreach at WMU. "The company got some valuable data that they can use in product development and also in marketing. The University got an opportunity to save some money, but also got a product that is working, and it's adding to our sustainability."

Turske's research is prompting change on WMU's campus. He and DeBoef have been going through buildings and assessing recycle cluster placement.

"It was a great project," says DeBoef. "It brought a lot of awareness, I think, to recycling."

Miller says projects like this also demonstrate to other companies the value of the Business Technology and Research Park.

"It's not that this initiative is simply related to the University or that you'll have an opportunity for collaboration," says Miller. "You will be located on the campus of a major research university. That speaks to the culture of your company. You can promote that you are very interested in being cutting edge. It's huge."

It's also huge for students like Turske, who are working on landing a job after graduation.

"Being able to take a project like this…build this entire project, see it through to fruition and then present it in front of executives was a great experience that not a lot of students get to have," says Turske.