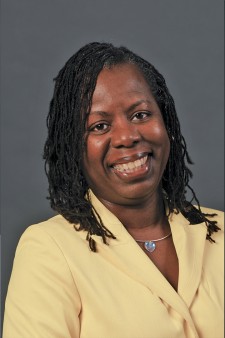 KALAMAZOO, Mich.—The Osher Lifelong Learning Institute at Western Michigan University has named a new director to lead the institute, which is a University-based, community volunteer program designed for learners age 50 and above.

"We're excited for Dr. Woolfork-Barnes to join our team," says Dr. Ed Martini, interim associate provost of WMU Extended University Programs. "Her presence in the Kalamazoo community in addition to her record of success in her career at WMU made her the perfect fit as we work to expand OLLI at WMU."

Martini notes the search committee was focused on finding someone who would be able to increase the awareness of OLLI at WMU among both campus stakeholders as well as members of the greater Southwest Michigan Community, and help transition OLLI at WMU to a self-sustaining unit and critical component of the University's mission of providing access to education for all.

"We are pleased to have found that candidate in Dr. Woolfork-Barnes," says Martini.

Woolfork-Barnes replaces the retiring Shirley Swanson who is wrapping up a five-year term as director. Swanson's leadership played a key role in the organization earning recognition and support by the Bernard Osher Foundation and becoming OLLI at WMU.

"I feel privileged to have been a part of making WMU a showcase for lifelong learning in Southwest Michigan," says Swanson. "I will miss the challenge of helping OLLI at WMU grow, but I am confident Dr. Woolfork-Barnes' leadership will allow the Institute to fully realize its vision to be the leading provider of distinctive lifelong learning opportunities in Southwest Michigan."

Having worked with a more traditional student population for most of her 30 year career, Woolfork-Barnes is eager to work with a new demographic and one she is deeply passionate about serving.

"The population served by OLLI at WMU has different motivations for education and learning than the high school and college students I've worked with for most of my career," says Woolfork-Barnes. "It's a privilege to have the opportunity to help grow the membership and bring increased visibility to the Institute within WMU and the Southwest Michigan community."

"I look forward to collaborating with the OLLI at WMU executive board, our partners in Extended University Programs, and our community partners to grow and bring diversity to the membership, bring visibility to the Institute in the WMU and Southwest Michigan communities, and transition OLLI at WMU into a self-sustaining unit," she says.

Woolfork-Barnes assisted in the creation and implementation of the infrastructure for the Office of Student Transitions when it launched in 2005. During her tenure, she established or enhanced a variety of programs, including new student orientation, fall welcome, first-year seminar, transfer student services and foundation scholars.

Before that, Woolfork-Barnes had two separate stints as the director for Upward Bound at WMU with time between the two spent as a research associate for Science and Mathematics Program Improvement, or SAMPI, at WMU. She has instructed courses in black women perspectives and statuses, women, multiculturalism and social change, and grant writing for WMU in addition to serving as a faculty facilitator in first-year experience programming.

Woolfork-Barnes has a Bachelor of Science in applied behavioral analysis, a Master of Arts in industrial organizational psychology and a doctoral degree in educational leadership, all from WMU.

About OLLI at WMU

The Osher Lifelong Learning Institute at WMU offers high quality non-credit programs for mature adults in the greater Kalamazoo community. WMU has been the home of an Osher Lifelong Learning Institute and part of the foundation's famed national network of similar entities since April 2014. The volunteer organization, with oversight from WMU's Extended University Programs, works with members of the community as well as WMU emeriti, faculty and staff to offer courses and trips year-round. More than 900 area citizens participate in those offerings annually.

The Osher Foundation was founded in 1977 by Bernard Osher, a respected financial-sector businessman, community leader and philanthropist. The foundation's goal is to improve quality of life through support for higher education and the arts. The lifelong learning programs it supports can be found in all 50 states and the District of Columbia. The foundation also supports a National Resource Center for the Osher Lifelong Learning Institutes, which is located at Northwestern University.